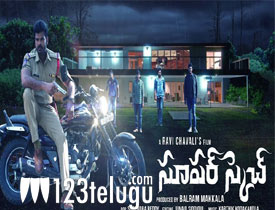 Ravi Chavali, who directed films like Samanyudu and Srimanarayana is back with his latest film ‘Sketch’ which has released today. Read the review to find out what the film has in store for us.

The film is based amidst a group of seven friends which includes five boys and two girls. One of the boys in the group, Vasi sets his eyes on a foreign girl and plans to rape her. He makes a perfect sketch and kills her along with his friends. But to his bad luck, one of the girls in the group, Pragya happens to see the crime. Left with no choice, Vasi and his friends try to kill Pragya. Bu because of a tragic accident, she goes into a coma. A case is registered and a cop named Nayak(Narsing) is assigned the duty to nab the criminals. Rest of the story is as to how he hunts down the murderers and lands them in jail.

Narsing who played the role of Nayak is good in his role. The way he takes up the case and gives a good performance in the Telangana slang makes things interesting for a bit.

The way drug addicts behave in real life has been shown quite realistically in the film. Even though all the boys in the villain group are new, they have given a decent performance. Their getups and the way they go about the crime looks decent.

Even though the plot is decent, the way director Ravi Chavai has narrated the film is quite disappointing. The crime investigation shown is not at all gripping and this is where the film disappoints completely. As the film is a crime thriller, there are no major twists in the film which is a major letdown.

The first half wanders here and there as the entire focus is on drug addicts. The key proceedings start after the major crime is done and things look good only in bits and pieces. As the actors are all new it takes time to adjust to the proceedings and get a feel for the film.

Music by Karthika is below par and the background score was even more disappointing and failed to elevate the film in whichever manner possible. Camerawork by Surender Reddy was impressive. Editing by Junaid is just about okay but a few scenes in the first half could have been chopped off. Production values of the film are just about okay.

Coming to the director Ravi, he has done a very disappointing job with the film. His narration is pathetic as he does not generate much interest in this crime thriller. Because of this, the film becomes slow and unengaging for the audience.

On the whole, Super Sketch is a film which does not have the basic twits which a crime thriller needs. Apart from this, the narration is also bland and does not excite you much. As the film has mostly newcomers, things become even more difficult for the audience to give this film a shot this weekend. Watch it at your own risk.