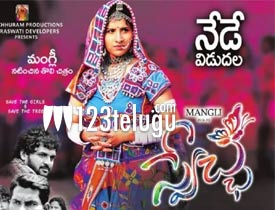 Continuing the trend of low budget films, yet another film called Swecha has hit the screens today. Let’s see how it is.

Swecha (Mangli), who is born in the Banjara community gets sold by her father to Sakku Bai. Somehow, she escapes from there and reaches Hyderabad. She grows up as a responsible citizen and once again goes to her village and starts saving little girls who are in the den of Sukkubai. The rest of the story is as to what kind of problems does Swecha face in her life and fulfills her dreams.

The women empowerment message showcased in the film is pretty good and needs to be appreciated. The way girls are treated in the Banjara community has been showcased quite well. All the scenes that showcase these incidents are quite emotional and bring depth to the film.

Mangli does a good job in her role. Her body language and modulations are perfect for her character and Mangli carried the entire film on her shoulders. The girl who played Mangli in her younger days also acted quite well. KP Chauhan, who did the lead role was just about okay.

As the film is filled with newcomers, certain emotions in the key scenes could not be elevated well. The first half is quite dull and does not have anything going it’s way. It is filled with unrelated scenes and songs which disturb the flow of the film.

The heroine’s characterization lacks proper depth in the film and looks a bit over the top in many areas. The hero does not have much to do in the film and is limited to a few scenes. More scenes about his love story with Mangli would have made a world of difference.

The concept of the film looks good but the director could not elevate it properly on the screen. The production values of the film are just about okay. Vijay’s came work is quite effective and showcases the film in a gritty manner. Music by Bhole was okay but his BGM is loud. Editing is horrible in the first half as many scenes could have been chopped off.

On the whole, Swecha is a film that has a good concept. The message showcased is good but the film has way too many unnecessary scenes and songs that keep side tracking the film time and again. Except for Mangli’s sincere effort, this film is let down by some bad direction and dull performances by the supporting cast. Ignore it this weekend.