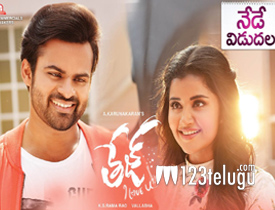 Tej I Love You is a very crucial film in Sai Dharam Tej’s career and has hit the screens today. Let’s see whether Tej gets his much-needed hit or not.

Tej(Dharam Tej) gets separated from his family and starts living in Hyderabad. There, he meets Nandini(Anupama) and falls in love with her in the due course of time. But a small accident to Nandini leads to a major chaos in the love story. Then, there are also family issues with Anupama’s past and complicates things even more. Rest of the story is as to how Tej solves Nandini’s problems and wins his love back.

As this is the first time that Tej has done a love story, he looks pretty decent in his role. Karunakaran has showcased him well as a lover boy and Tej too has lived up to his expectations and did his best. The entire story runs on Anupama’s character and she is pretty impressive. She had a good scope to perform and is the major attracting force for the film.

Some comedy scenes featuring the lead pair in the first half have been executed well. Anish Kuruvilla who played Anupama’s dad was also good in his role. Certain family emotions which have been showcased in the beginning work well in the film.

One of the basic minus points of the film is Karunakaran’s narration. There is no novelty in his story line and taking as he has showcased the film in a very old school manner.

For all love stories to click there should be basic romance in the film and that is completely missing in Tej I Love You. Except for some comedy scenes the director has failed to induce good emotional part in the love story. Adding to his, the below average music does not help matters much.

The second half is where things get even worse as the film shifts to many genres. What starts off with a breakup story shifts to a family drama making things tedious for the audience.

As said above, the music by Gopi Sundar is disappointing. Production values by K S Rama Rao are good as the film looks rich in every frame. The camera work is routine and showcases the film in the age-old style. Dialogues are okay and the styling done for Tej is good.

Coming to the director Karunakaran, he has done a disappointing job with the film. His narration is jaded as all the key emotions look artificial. Even though he used to choose routine stories in his previous films, he used to add good music and amazing chemistry between the lead pair. But the same is missing in Tej I Love You completely.

On the whole, Tej I Love You is the same old love story which Karunakaran has made many a time in the past. There is nothing new which this film showcases. Bad songs, lack of interesting romance and forced elements sidetrack the film. The only solace of the film is Sai Dharam Tej who proves that he can carry a love story with ease. Rest of elements are just about ordinary. Watch it only if you want to see Tej in a new avatar.