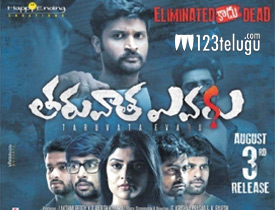 Continuing the trend of low budget films, yet another movie titled Tharuvatha Evaru has hit the screens today. Let’s see how it is.

Chandu(Manoj) and Nitya(Priyanka Sharma) are lovers who break up with each other because of a tiny issue. This is also the time when Nithya decides to participate in a reality show along with her friends. Knowing about this, Chandu also joins the show. The twist in the tale arises when the contestants keep getting killed one after the other. Rest of the story is as to how Chandu saves Nithya’s life and wins his love back.

Debutante Manoj does a decent job in his role. He was very good in the scenes where he feels jealous of her girlfriend liking someone else and during the climax where he saves her. Priyanka Sharma was okay and showcased decent glamour which works for the masses.

Kamal Kamaraju was good in his crucial role and so was serial actor Bharani who did a fabulous job with his performance. The theme of how silly ragging can take lives has been showcased in a good manner. Hero’s friends evoke some comedy in the first half.

The story of the film is good but the director did not write good scenes which elevate the proceedings for the audience. The pace of the movie is very slow in the first half and unnecessary twists distracts the audience attention.

The suspense elements have been added for no reason and this makes the film even boring at times. Various murders keep happening in the film but there is no pain that is generated through these killings.

The logic goes for a toss as many scenes do not have any logic. The characters look fake and there is no thrill factor in the film which is an even bigger disappointment.

Background music scored by Vijay is disappointing and does not elevate the film at all. The camerawork was decent and so were the dialogues. Production values are below par and at least fifteen minutes of the film should have been chopped off. Coming to the director duo Rajesh Koduru and Rajesh Reddy, they have done a disappointing job with the film. They have written the core story well but have failed in executing the film in an entertaining manner.

On the whole, Tharuvatha Evaru is disappointing suspense thriller which does not have anything going its way. Apart from a decent theme, this film is filled with silly comedy, dragged scenes and logicless narration making it a tedious watch this weekned.