OTT Review : The Baker And The Beauty- Telugu Series On Aha 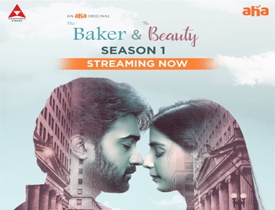 Aha Video’s flagship series, The Beauty And The Baker is available for streaming now. The series has Santhosh Shobhan and Tina Shilparaj in the lead roles. Here’s our review of the series.

The core plot revolves around the unlikely romance that brews between Vijay(Santhosh), a small-role baker, and Ira(Tina), a happening actress. What are the external factors that affect the love life between the couple? Can they overcome these challenges?

The casting for the series is bang on point. Santhosh, Tina, Jhansi, Srikanth Iyengar, and others deliver impressive performances. Especially, Santhosh excels in emotional episodes. His performance is realistic and impactful.

The unlikely romance that brews between a middle-class baker and a filthy rich actress fuels the narrative and this part is handled very well. The subtle emotions are presented with good conviction. The class disparity between the lead pair and the consequent difference of opinions are portrayed in a realistic manner.

The first and foremost flaw of The Baker And The Beauty is the rushed and poorly written ending. The climax is rushed through and the desired level of emotion isn’t sustained. The final two episodes should have been written and executed with more conviction.

Also, the inferiority complex track involving the male lead turns monotonous beyond a point. Him being jealous of his girlfriend’s ex looks intriguing at first but the same narrative keeps repeating till the end, which could have been avoided.

Jonathan Edwards does a fine job in regard to extracting the right emotions for most parts of the comedy drama series, barring the end portion. The background score suits the theme of the proceedings. Cinematography is neat.

The Baker And The Beauty banks on the subtle emotions that are evoked through the unlikely love track between the lead pair. But the emotional connect subdues towards the end, which doesn’t help the cause. Nevertheless, the series can make for a decent one-time watch.