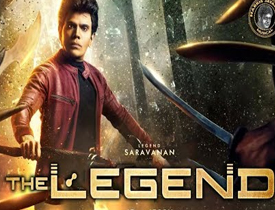 Famous businessman and Saravana stores owner Legend Saravanan is making his acting debut with the film The Legend. Apart from acting, the entrepreneur also produced this film on a whopping scale. The film hit the screens today. Let’s see how it is.

Dr. Saravanan (Legend Saravanan) hailing from Vanaparthi, is an eminent and world-renowned scientist who has made an exceptional contribution to the field of science. He comes back to his native with an intention to do something for his people and to make students great scientists like him. Moved by the death of his friend, due to juvenile diabetes he decides to come up with medicine that can cure the disease permanently. VJ (Suman) who does insulin business feels this invention is a threat to his business. What did VJ do to stop Dr. Saravanan? Did Dr. Saravanan achieve what he wanted to do? The answers can be known only on the big screen.

The movie is mounted on a large scale which is very much evident on the screen. Each and every frame looks very rich and the makers have spent a bomb on the film. The songs are picturized in an amazing way.

Legend Saravanan’s performance is ordinary in his debut film. Both the female leads Geethika and Urvashi Rautela looked gorgeous and had good scope for their roles and they did a fine job while the former gets more screen time. The action scenes choreographed were of high quality and were also shot well.

The main drawback of the film is its plot. It is very routine and predictable from the initial scene. The film runs on a commercial template that has become outdated now. The key twists placed in the film are pretty ordinary and one can easily guess them.

Neither of the halves makes an impact. As said during the promotions the film had all the aspects like emotion, romance, comedy, and action but nothing worked well as the execution is quite miserable.

The big-budget movie is irritating with many boring elements incorporated into it. The film keeps us constantly reminded of several other films where the protagonist takes on the might of the pharma mafia.

The film has a massive casting like Prabhu, Nassar, Suman, Robo Shankar, Yogi Babu, and Devadarshini but none of them make a mark as their scenes end abruptly. Lengthy run time tests the patience levels.

The music by Harris Jayaraj is very good and his background score also makes an impact. The cinematography by Velraj is magnificent. The herculean effort put in by the technical team deserves appreciation as they made the film watchable.

Editor Ruben could have done a far better job by trimming the movie length. Coming to director JD – Jerry, he has done a poor job. He failed in delivering entertainment for the most part of the time and made it hell boring. He tried to tick all the boxes a commercial film has, but his packaging is misplaced.

On the whole, The Legend is an epic snore-fest. The film is quite disappointing with a lackluster screenplay and many boring elements. The director tries hard to give a proper masala entertainer but he fails to do so. The amazing production values and the lovely heroines are the saving grace in this routine drama. You can skip it and wait for another good film this weekend.