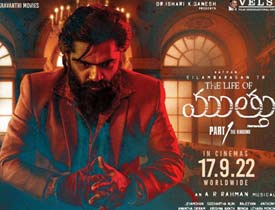 Silambarasan, often referred to as Simbu, is very familiar to Telugu audiences. The actor has now joined hands with the evergreen director Gautham Vasudev Menon for the film The Life of Muthu. This is the fourth collaboration for the actor-director duo. The film hit the screens today. Let’s see how it is.

After clearing his graduation Muthu’s (Simbu) family situation forces him to look after a forest land. Unexpectedly the forest catches fire one day which makes Muthu and the land owner get into a tangle. Muthu is suggested by his mother to leave for Mumbai. Muthu starts working in a Parotta stall there to make a living and to support his family financially. Out of the blue, he gets to know that there is a connection between the workers there and the underworld. He too becomes part of them in a series of sequences. The journey of Muthu in the dark world forms the crux of the story.

Simbu played the role of Muthu with finesse. He has totally lived in the character and we only see Muthu on the screen but not Simbu. Such is the perfection shown by the actor. Simbu takes the madness to the next level with the interval sequence.

There are a few interesting scenes in both the halves which are pretty well handled. The climax scene where Simbu and Neeraj Madhav meet has a lot of depth and inner meaning in it. The action sequences are well composed and the love track is decent.

Siddhi Idnani is good in her role and is beautiful to watch. The interval episode is shot brilliantly and the camera work here is awesome. The portions of Muthu working hard and his daily routine in this process are realistic. The conversational style of songs is good to watch.

The main culprit for the film is its patience-testing narrative. From the beginning, the pacing is very slow and it hinders the overall impact. The narrative never gets racy. Scenes that should have been superb are also not executed well.

There is a lot of scope for giving adrenaline rush moments but the director stuck to a flat screenplay. The film at times gets dragged and predictable too. Also, there is an irregularity in the storytelling. The potential is visible but viewers won’t feel it painfully.

The length of the film is another setback as it is close to three hours. The hook factor a film should have especially when there is a sequel is not present in this film.

AR Rahman’s thumping background score gives a solid impact and he literally enhances many sequences in the film. Also, the songs were ecstatic to listen to. The camerawork by Siddhartha Nuni is supreme and he has captured the world of mafia remarkably well. Telugu dubbing is fine.

The editing team should have cut short the film to make matters better. Coming to director Gautham Vasudev Menon, he did just a very okayish job as the film works only in parts. The director should have taken more care regarding the screenplay. Writer Jeymohan’s story isn’t novel but it has its moments.

On the whole, The Life of Muthu is a middling gangster drama. Simbu’s terrific portrayal as Muthu, a few enthralling scenes, the interval block, and AR Rahman’s arresting music are its assets. The dead slow narrative, inconsistency in many places, and lengthy duration are its drawbacks and hence they make the film just a passable watch. You can watch the film provided you are okay with these flaws.