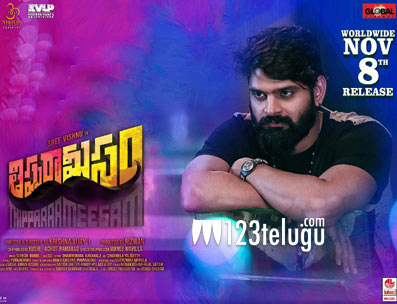 Thippara Meesam is one film which has been in the news for its unique promos. The film has hit the screens today. Lets see how it is.

Mani(Sree Vishnu) is a DJ by profession who hates his mother(Rohini). Whenever he gets into trouble, he demands money from her. At a point, things become so serious that he demands 40 lakhs from her. When she fails to pay him the amount, he files a case on her. Why is Mani hating his mother? Will he win his case? and how will he solve his problems? That forms the rest of the story.

Seer Vishnu is the biggest highlight of the film and like always, gives a sincere performance. His character is weird and Vishnu pulled it off with ease. He was very good in last fifteen minutes especially in the emotional climax.

Rohini is yet another big pillar of the film as her silence and emotional expressions bring a lot of depth to the film.

She does not have much dialogues but speaks a lot through her eyes. Benarjee was very good in his supporting role and played a key part.

The last 15 minutes of the film are pretty good and emotional ending is impressive. The background score is very impressive and gives the film a new edge.

The film falls flat mainly because the director always tried to make the film in a different and new manner. In trying to be different, he gave weird twists to hero’s character and made the premise dark with unnecessary crime scenes. In all this, he lost the basic feel in the emotions during the first half.

The length of the film is very long. A simple and two hour story has been dragged for no reason making the audience bored in many areas in the first half. The first half has no seriousness at all and one wanders what is going on in the film.

The screenplay takes a severe beating as the proceedings are very slow and take forever to get to the actual twist. The audience has to wait for 2 hours to get into a position to understand why all this is happening. Only when you watch the climax you get a clarity on the proceedings.

The film needs serious editing for over half an hour and mainly in the first half things needs to be cropped. The camerawork is pretty good. Dialogues are decent and so was the production design which showcases the night effect well. Production values are decent.

Coming to the director Vijay, he had a decent story as a son filing a case on mom and why all this happens is shown well in the end. But to go through this, he has made the film wayward, lengthy, and off track in many areas. If he would have directed the film with a straight tone, things would have been a lot better.

On the whole, Thippara Meesam has a decent premise but the execution is wayward. A good story is narrated in a dragged and haphazard manner making the film lengthy. However, Sree Vishnu shines in his role and makes it somewhat watchable for the audience. The last 20 minutes is gripping but to enjoy that, one has to sit through the dragged first half. So, watch this film with an open mind and be prepared for what is going to come in as things get unveiled at a very slow and dull manner.