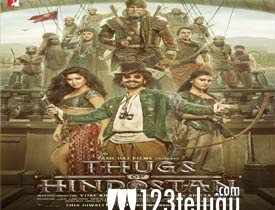 Thugs of Hindostan is special in many ways as it is the first time that Aamir Khan and Amitabh Bachchan are collaborating with each other. The film is a period drama which has been directed by Vijay Krishna Acharya of Dhoom 3 fame. After a low key round of promotions, the film has hit the screens today. Let’s see how it is.

The story of the film is set in the early 1800’s where the British were ruling India and Raunakpur was one of them. After killing the king of the region, the British somehow miss the king’s daughter Safira(Fatima Sana Sheikh) and Khudabaksh(Amitabh Bachchan) who is the army chief of the kingdom. For years, they try hard to nab them but fail each time. This is the time a British soldier suggests the name of a cunning thug called Firangi(Aamir Khan) who is the best man to nab Safira and Khudabaksh. Rest of the story is as to how Firangi reaches Khudabaksh’s team and becomes one of them and helps the British.

The first thing that hits you right away is the stunning production values of the film. Money is spent like water as the set up to recreate the war effect or the British rule looks top class. Special mention should go to the ships built and used in the fight sequences as they are top notch and look great on screen. Fatima Sana Shiekh gets a central role and impresses in her character. Her combination scenes with Amitabh have come out quite well.

Speaking of Big B, he is the real hero of the film as the plot is based around him. Even at this age, Amitabh is quite agile and does all the fights with ease. Aamir Khan has a tricky character and performs to the best of his capability. His look, the way he fights and evokes comedy was good on screen.

The first half of the film was pretty decent as the premise is set well and the combination of Aamir and Amitabh looks good in certain scenes. The British actors who played key roles have done their best in the film.

One of the biggest minus points of the film is the shoddy direction. The entire blame should be gone to director Vijay Krishna who has messed up a pretty decent idea with his narration. The film holds true for the first one hour and post interval, there is not one scenario which generates interest.

If you see the film scene wise, things look good as the fights and rich visuals look extravagant. But there is no flow and Aamir’s character changes track just like that which is a bit hard to believe in the later part. The logic goes for a toss during this time as Amitabh’s track and the way the Indians fight with the British is showcased in an outright silly manner.

Katrina Kaif is top notch in the looks department but it is hard to understand why she even accepted the film. She is like an item girl who comes and goes for two songs. All those who see the trailers and feel that she will have a good role will be fooled in the theaters.

Amitabh Bachchan who is famous for his dialogue delivery hardly has any dialogue in the first half. His role has been loosely modeled on Kattappa in Baahubali but Thugs of Hindostan is nowhere close to Baahubali in any which way.

Music of the film is average but the background score by Ajay Atul is top notch. The manner in which the score elevates the fight sequences is neat. As said earlier, production values of the film are top notch. Editing is pathetic as at least a song and few scenes in the second half could have been edited out. Set work and production design were amazing and so was the stunning camerawork by Manush Nandan.

Coming to the director Vijay Krishna, he has single-handedly spoilt the film and made things go haywire. His story idea was old and did not have any twist. This was the reason he executed all the twists through Aamir’s role which look unconvincing. Vijay and Yash Raj’s idea was to bring two of the biggest names in the industry and make a film with rich production values but in all this, the basic emotion and logic which are the backbone of any film go missing in Thugs of Hindostan.

On the whole, Thugs of Hindostan is a shoddy period drama which falls short of expectations in a big way. Even the likes of Aamir and Amitabh Bachchan cannot save the film with their screen presence. The film has great visuals but that is not enough for the audience to sit through three long hours of the movie which has no emotional connect at all. The film might collect some money at the box office but in totality, it is a massive disappointment from the likes of Yash Raj Films and Aamir Khan.