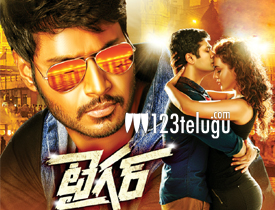 Sundeep Kishan is one of the most promising actors in recent times. He has now changed gears and is attempting a full length mass role with Tiger. This action entertainer which also stars Seerat Kapoor and Rahul Ravindran has hit the screens today. Let’s see how it is.

Tiger(Sundeep Kishan) and Vishnu (Rahul Ravindran) are childhood friends who are very close to each other. Tiger is quite aggressive in nature and can do anything for friendship. As time passes by, Vishnu falls in love with Ganga(Seerat Kapoor), who has a rebellious background from Kasi.

Things go sorely bad for Vishnu as Ganga’s parents come to know about their daughter’s love affair and decide to kill the couple. Rest of the story is as to how Tiger comes into the picture and saves his friends from this chaos.

Tiger is an attempt to showcase Sundeep Kishan in a mass role, and the makers are spot on with their decision. Sundeep is dynamic in a rugged role and carries the entire film on his shoulders. His body language, ease in fights and confidence in dialogues are pretty impressive. Tiger should be a turning point in his career and bring him some big budget action entertainers in the future.

Rahul Ravindran is pretty good in his role and nicely balances the film with his subtle approach. All his scenes with Sundeep Kishan have come out quite well. Thaman should definitely be credited for the success of the film as his thumping background score elevates the emotions to another level. The message that is showcased regarding honour killings is quite novel.

The crisp run time is a huge bonus as the proceedings are wrapped up in no time. First half has some youthful moments where as the second half is quite emotional.  It is also very good to see that the director has stuck to the plot and did not add a love track for Sundeep just for the sake of a commercial aspect.

Story of the film is nothing new and has been tested many a times before. Lack of known faces for the villains role also decreases the depth in the emotions.

As said earlier, Thaman’s background score is a huge bonus. Screenplay is pretty simple as all the scenes during the first half are designed well. Dialogues are cool and suit the nature of the film. Camera work by Chota K Naidu is brilliant and showcases the film and action sequences in a superb light. The way Sundeep Kishan has been elevated with these mass visuals are pretty good.

Coming to the director Anand, he has done a wonderful job with his narration and does not beat around the bush. He has cleverly showcased Sundeep and does not go overboard in his elevation and manages to engage the audience decently.

On the whole, Tiger will be a career changing film for Sundeep Kishan. He is quite impressive in a mass avatar and has all the trappings to go to the next level as an actor. Thumping background score, lovely visuals and a crisp narration are huge assets. If you manage to ignore the predictable story line, you will definitely end up liking this emotional action entertainer.