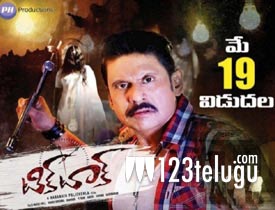 Entertaining star, Harinath Policharla, who has earlier impressed the Telugu audience with his unique entertainers, is back with yet another horror based entertainer Tik Tak which has released today. Let’s see how it is.

Harinath(Anji) is a small time mechanic who leads his life with his sister-in-law Maha Lakshmi(Monika). All of a sudden, a character named Preethi(Nishi Ganda) enters the scene and throws a challenge to Harinath to spend a few days with her in an old mansion called Gantala Bungalow.

Anji accepts the challenge and enters the Bungalow along with his friends. What troubles do Anji and his friends face in the Bungalow? Why did Preethi throw this challenge? and How does Anji deals with all his problems? That forms the rest of story.

The opening shot which explains the existence of ghosts with Harinath’s voice over is good. He didn’t try anything new and continued his old format in acting which is a big relief for the audience. One of the big plus points of the film is its crispy and short run-time. Harinath’s garage mates evoke some fun here and there.

One of the heroines, Monika is decent in her role and impressed with her cute village girl looks. The second heroine, Nishi Ganda’s skin show will attract the masses. Surprisingly, the second song in the film has been shot well with some very good graphics work.

Harinath being a director disappoints the audience with his boring narration. His lack of clarity on the story line and screenplay clearly reflects in the boring proceedings. The horror element in the story is yet another big let down as it does not have anything new to offer.

Though the first five minutes of the film looks interesting, the film falls flat and not even a single scene impresses the audience from there on. An item song which comes during the climax will test your patience and literally irritates the audience.

As said above, Harinath disappoints big-time as a director. He needs to take a break and work on better scripts. Editing by Venkat Ramana is below par as most of the scenes and climax song could have been easily chopped off. Cinematography by P. Vamsi Krishna is okay. Music by S&B Mill is decent as the background is impressive in parts. Production values are cheap for this limited budget film.

On the whole, Tik Tak has nothing new to offer for the audience. Harinath tries to tell something related to ghosts and their existence but unfortunately, his narration and proceedings take the film off track. Except for the initial part of the first half, the film is a big let down and can be easily avoided this weekend.