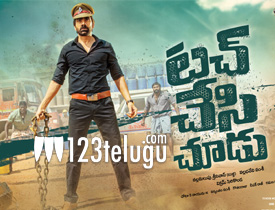 Post the success of Raja The Great, Ravi Teja is back with yet another commercial entertainer called Touch Chesi Chudu. Starring Raashi Khanna, this film has hit the screens today. Let’s see how it is.

Karthikeya(Ravi Teja) is a man who keeps his family first before everything. As time passes by, he falls in love with Pushpa(Raashi Khanna) and when things seem to be going fine, he suddenly comes across a dreaded criminal called Irfan with whom he shares a dreaded past. Who is this Irfan? What does he have to do with Karthikeya? and what is the backstory to all this? To know the answers, you need to watch the film on the big screen.

Ravi Teja leads from the front and gives a memorable performance. His energy levels as a cop are very good and Ravi Teja packs a punch during all the mass action episodes. His chemistry with Raashi Khanna is pretty good and entertains us during the first half.

Raashi Khanna looks glamorous in the songs and provides the necessary eye candy. Murali Sharma is impressive in his supporting role. The interval bang has been dealt on an very interesting note.

Some of the thrills showcased have been executed quite stylishly and will go well with the masses. Seerat Kapoor is okay and does her supporting role well. The first half of the film has some good family emotions which keep things light. Vennela Kishore is just passable.

As the entire story gets revealed only during the second half, the makers should have packed things with a tight screenplay and brisk proceedings. But sadly, crime episodes are stretched and make things tedious. The narration is a bit let down during this time as the screenplay takes a beating.

As in all commercial entertainers, there is nothing much to rave about the storyline. The proceedings are also quite predictable as you know exactly what is going to happen next. The runtime of the film is also high as some scenes related to the villains and cop set up should have been trimmed to make things crispy for the audience.

Production values from Nallamalupu Bujji are pretty good as the film looks quite rich with nice visuals. Cameraman needs a special mention as he has showcased the fights in a superb manner. Editing is below par. As said earlier, the screenplay takes a beating during the second half. Music by Pritam and Jam 8 is decent as a couple of songs sound well. Mani Sharma’s BGM is quite impressive.

Coming to the director Vikram Sri, he has done a below par job with the film. Even though he adds some decent moments during the first half, he narrates the actual story only during the later part. There too, he drags the film during the last twenty minutes. One good fight and mass episode is followed by some tedious scenes which drag the film.

On the whole, Touch Chesi Chudu is a typical cop drama which showcases Ravi Teja in a powerful manner. He leads from the front in this otherwise routine commercial entertainer. Some mass elements and good fights are basic assets for the film. The storyline is quite predictable and things get side track during the second half. If you are the one who loves high voltage masala entertainers, this film can be given a shot. But for others, Touch Chesi Chudu ends up as just a below average fare this weekend.