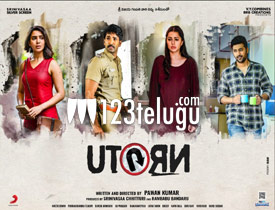 Samantha is on a success streak with multiple hits to her name. The star heroine is pinning high hopes on U-Turn which is hitting the marquee today. Scroll down to check whether the movie manages to live up to the expectations or not.

Rachana(Samantha) is a news reporter who is trying to figure out the reason behind the common public’s lack of civic sense. She collects details about people who neglect traffic rules and de-arrange the dividers on the RK Puram flyover to take a U-Turn and cut-short their journey.

In this process, Rachana gets involved in a deep mess as a series of unexplained incidents lay multiple hurdles to her personal life. A police inspector named Nayak(Aadhi Pininsetty) gets himself involved in the case and start an investigation with help from Rachana. What are these unexplained incidents? How does her personal life gets affected by these mysteries? Can Rachana and Nayak solve the case? The answers to these questions form the core plot of the movie.

Samantha shines right from the word go in what-could-be the most challenging role in her career. Her intense performance in a few crunch episodes add a whole lot of depth to the movie and rake up the excitement factor. She looks really good in her makeover and her new look suits her quite well.

Aadhi Pinisetty is another big asset to the movie as his mannerisms and physique as a police officer are perfect. The proven actor came up with a matured performance and keeps things simple. Also, Rahul Ravindran is really good in his role and the episodes featuring him and Samantha are very realistic and believable. Bhumika gets a crisp role and delivered what was needed of her.

The core plot of the movie is intriguing and offers a new experience to the viewers. The interval block packs a solid punch and ups the ante with a key twist in the tale. The entire setup looks near-to-life and that brings an authentic vibe to the movie.

The initial stages of the movie have been slightly dragged and so are the post-interval episodes. However, realistic performances from the lead cast overpower these flaws.

Samantha’s dubbing looks a bit patchy in a particular scene in the first half but she did reasonably well for most parts considering the complexities of her role.

The climax sequences are a bit confusing as fictional horror is infused with realistic drama. A more detailed and convincing explanation could have worked wonders for the movie. The movie runs at its own pace and that may not go well with the B and C centers

The production values for this mid-range movies are sleek. Every frame looks authentic and the production design deserves a special mention here. Coming to the director, Pawan Kumar, who directed the original version made some minor tweaks to the Telugu version and succeeds most of the time with his narration. Music is a big plus as the thumping background score elevate a few scenes to a whole new level. Also, the camera works are of sublime quality and help in bringing an edge-of-the-seat experience to the viewers.

All in all, U-Turn is a suspense thriller that mainly banks on the performances of the lead cast and boy did they bring this movie to life. The likes of Samantha, Aadhi, and Rahul have shown a lot of dedication and that elevates the suspense drama even higher. However, a few unconvincing episodes towards the end are dealt on a weaker note. Even though the movie does not cater to a section of the audience who prefer mass masala entertainers, U-Turn can easily be given a shot if all you need is a well-etched thriller.