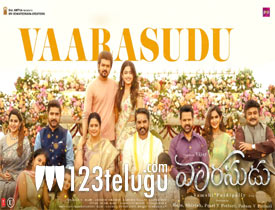 Thalapathy Vijay, who enjoys a good following in Telugu states, has now come up with a family entertainer Vaarasudu. Directed by Vamshi Paidipally, the movie has Rashmika Mandanna as the female lead. The film hit the screens today, and let’s see how it is.

Rajendra (Sarathkumar) is a renowned businessman who wants to hand over his group of companies to one of his sons, played by Shaam and Srikanth. Rajendra also has a third son Vijay Rajendra (Vijay) with whom he has understanding issues. Hence Vijay stays away from the family. When Rajendra is about to decide on his heir, the whole family breaks into parts. When things go out of hand, Vijay takes the responsibility of holding the family together. What did Vijay do? How did he solve the family issues? This forms the rest of the story.

Thalapathy Vijay is once again in his elements and gave a neat performance. It has been a while since he acted in a proper family drama, and the actor was superb in the film with his one-liners, punch dialogues, and screen presence. His comedy timing worked big time, and Vijay is also stunning in sentimental scenes.

For the most part, the emotions work well and are kept on a lighter note. This part was nicely handled without overdoing them and strikes a chord. Amma song was nicely placed which is the soul of Vaarasudu. There are some good moments placed in both halves and they were nicely used whenever the film became slow. There are a fair amount of elevation scenes for Vijay and a few are whistle worthy.

The fun part is neat and scenes between Vijay and Yogi Babu evoked decent laughs. The boardroom scene that comes in the second half is hilarious and lifts the spirits. There is a big list of artists in the movie like Jayasudha, Sarathkumar, Srikanth, Shaam, and Sangeetha and they were all good in their respective roles.

The biggest culprit here is the film’s painful length which at times tests the patience levels. The movie is close to three hours which as a whole reduces the overall feel. Due to the excessive length a few good moments in places go unnoticed too. A few unwanted and prolonged sequences are included which weren’t necessary and the movie team could have taken care regarding them.

The movie’s story isn’t new and a few scenes also do remind of other family dramas. The movie runs on a template that has been used several times by now. In addition, the antagonist’s character played by Prakash Raj is poorly written and he doesn’t have much scope to perform.

Few scenes are conveniently written for the protagonist and they seem redundant. Rashmika doesn’t much have to perform and she is just limited to a couple of songs. The drama between Vijay and Sarathkumar is just okay but it could have been way better. The VFX works at places are shoddy.

Dil Raju has spent a huge amount of money on the film, which is reflected in every frame. The production values are magnificent, and the visuals are colorful bringing a festive vibe. Credits to the cinematographer Karthik Palani for making the movie look eye-candy. Music by Thaman is top-notch, and in a few portions, he elevated Vijay with his thumping background score.

The editing as mentioned is below-par and as close to fifteen minutes should have been chopped off. Coming to the director, Vamshi Paidipally, he has played a safe game by taking a formula-based story but he has made sure to place a few entertaining moments in places. But he could have been cautious about the length. Vamshi has presented Vijay in a good manner though.

On the whole, Vaarasudu is a passable family drama that has its moments. Vijay looks good and the way Vamshi elevates the actor will please the fans. The family drama is decent but to enjoy the movie one has to go through its lengthy runtime. The movie hence ends up a passable watch this festive season.