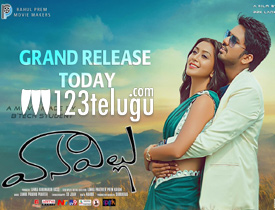 Vanavillu is one of this week’s release which was promoted quite decently. Directed by Pratheek Prem Karan, this film has hit the screens today. Let’s see whether it manages to impress the audience or not.

Pratheek(Pratheek Prem) is an easy going guy who goes to any extent to help his friends. When everything seems to be going fine, a girl called Sravya(Sravya) enters his life and pushes him to take up a challenge? Who is this Sravya? What is her backstory? What challenges did she force Pratheek to take up? and how does Pradeep handles these situations? That forms the rest of the story.

Last twenty minutes of the film are good as the actual story is revealed and the audience gets a clarity about the whole picture. Looks wise, debut hero Pratheek Prem is okay and gives a decent performance in his boy next door role. His dance movements in two songs and screen presence in a few elevation scenes are good.

Heroine Sravya gave an okayish performance in her given crucial role. The girl who acted as the second heroine is also okay. Her glamour in a beach song will attract the youth.

The first half of the film has absolutely nothing to offer and tests the audience patience with its slow-paced narration and dull proceedings. The film takes its own sweet time to enter into the main story and things get on right track only in the last twenty minutes of the film.

There are a few illogic scenes which look awkward and over the top. The way things are hurried up in the climax may not appeal to the audience at all. The triangular love story is not showcased in a proper manner. There was a scope for comedy which was not utilized at all.

Director Pratheek Prem Karan, who also plays the lead role has come up with a decent story but takes a diversion and narrates the film with some unnecessary proceedings. His execution lacks an interesting screenplay and proper engaging moments. Editing work is not up to the mark as close to fifteen minutes of the film can be easily chopped off. The cinematography is good as a few natural Araku locations are captured beautifully. The lighting and rich framing used for two songs are attractive. Music is decent and the background score for a few elevation scenes is good. Production values for this limited budget film are good.

On the whole, Vanavillu is a triangle love story which does not impress much. The film lacks proper screenplay and a gripping narration and this is where things go wrong completely. Except for the last twenty minutes, this film has nothing interesting to offer and can be left alone this week.