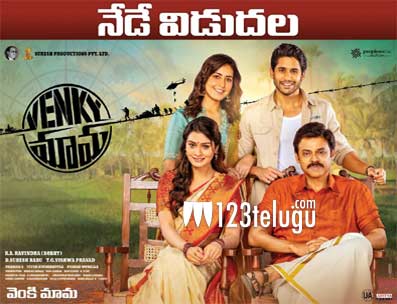 After a huge round of promotions, Venky Mama has finally hit the screens today. Lets see whether it lives up to all the hype or not.

Military Naidu (Venkatesh) fights with his parents and brings his sister’s son Karthik (Chay Akkineni) after her death. He becomes everything for Karthik takes care of him from childhood onwards. As time.passes by, Karthik falls in love with Haarika (Raashi Khanna). This does not go well with her dad played by Rao Ramesh. He creates a small dispute between the Mama and Alludu and gets them divided. But the actual reason for Miltary Naidu’s rift with his Alludu is something else. What is that reason? and it how will be solved forms the rest of the story.

The chemistry between Venky and Chay looks adorable on screen. They light up the screen during all the fights and songs and provide good entertainment for fans and family audience. Venkatesh leads from the front and is very good in his comedy and emotional avatar.

Chay also does well in his role and gives able support to Venky. All his comedy scenes with Hyper Aadi are pretty good. For a change, Payal Rajput gets an interesting role and does well. Raashi Khanna is also good as Chay’s love interest.

The first half of the film is pretty good as there is comedy, songs, and well packaged ingredients which works well. Nasser was also good in his limited role and so was Rao Ramesh. Prakash Raj was neat as the military chief.

The director etches the bond between Mama and Alludu quite well in the first half but does not create a solid conflict point for their break up which looks a bit odd in the film.

Looks like the director Bobby has ran out of ideas in the second half as the army backdrop is good but has not been handled well. The climax looks illogical and is rushed up as the makers did not have much to show.

Yet another main drawback is that the emotion between Mama and Alludu is not at all elevated well in the second half. Some more drama and emotional scenes would have made a lot of impact.

Coming to the director Bobby, he has done a good job of handling both Venky and Chay well. He gives them equal screen presence and extracts good performances from them. Had he added more emotional scenes between the two heroes in the second half things would have been good. But he lets go of the climax and ends the film in a dull note.

On the whole, Venky Mama is a typical film drama which has a great premise and good star cast. The first half is impressive as both Chay and Venky create good entertainment. But things fall flat in the second half and disappoint a bit. The film is aimed at the single screen audience and will please them.