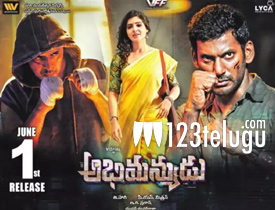 Vishal’s Irumbu Thirai was a good hit at the box office in Tamil. The Telugu version titled Abhimanyudu has hit the screens today. Let’s see how it is.

Karunakar(Vishal) is an army major who wants to get his sister married into a rich household. In order to do so, he forges documents and gets his loan approved. But to his shock, the entire loan amount vanishes from his account in a flash. Upset with this, he starts investigating the case himself. To his shock, he finds out that a notorious cyber criminal(Arjun) is behind this and is looting the entire nation in similar cases. Rest of the story is as to how Karunakar finds the man behind all this and puts him behind bars.

One of the biggest plus points of the film is the innovative script. The way today’s cyber crime has been set into a thriller is quite decent. Vishal is very good in his role and carries the film on his shoulders. He is amazing with his fights and is improving acting wise with every film of his. Samantha looks lovely in her role of a doctor and does what is needed.

But the major asset and surprise factor of the film is senior hero Arjun. The way he has gone about his role is too good. Arjun is amazing as the cyber crime don and brings a lot of depth to the proceedings. The way his character has an edge over Vishal in most of the scenes looks good on screen.

All the confrontation scenes between Vishal and Arjun are gripping and form the mainstay of the second half. The second half is where the actual film kicks off and the narration of how our social media and other online information are misused is showcased in an interesting manner.

The first half of the film is slow as the film takes forever to take off. Some scenes of Vishal’s family background and the reason for which he takes up the loan are stretched too much. This family track does not have much emotions and drags the film right till the interval point.

Vishal’s role lacks clarity. Sometimes, he fights like a common man and conveniently uses his military background in a crunch and difficult times. Also, the angle of his interest in settling down abroad looks over the top. The film has complete Tamil nativity in the first half and the comedy showcased through Vishal’s uncle is not that entertaining.

Production values of the film are very good as the technical aspects of how cyber crime happens is showcased in a very clear manner so that everyone can understand. Camera work is decent but the VFX work done to showcase the cyber crime is brilliant. Telugu dubbing is good and so were the dialogues. Editing is just about okay as the film could have been even crispier during the first half.

Coming to the director Mithran, he has done a decent job with the film. His story idea is very good but his execution is half baked. He takes forever to enter into the main story but once he does that, things become very interesting for the audience.

On the whole, Abhimanyudu is a new age thriller which works well in the second half. The interesting narration and manner in which cyber crime is done by high-fi criminals holds your attention completely. But in order to enjoy this, you need to sit through the lethargic first half which is quite slow. If you are okay with this and are the ones who love crime thrillers, you will end up liking this film, But for others, Abhimanyudu ends up as just an okay watch this weekend.