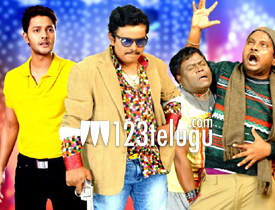 Continuing with the trend of crime comedies, yet another interesting flick titled ‘Where is Vidya Balan’ has hit the screens today. Let’s see how it is.

Kiran (Prince) is a simple pizza delivery boy who falls in love with a doctor named Swathi (Jyothi Setti). He starts wooing her and some how succeeds in winning her love.

While all this is going on, the couple suddenly get stuck in a chaotic situation where a deadly minister (Jaya Prakash Reddy), a reputed doctor (Rao Ramesh) and a funny don (Sampoornesh Babu) are after Vidya Balan.

Who is this Vidya Balan ? Why are everyone after her ? and what is this chaotic situation all about ? To know answers to these questions, you need to watch the film on the big screen.

Second half is the biggest asset of the film. The actual fun starts during this time and the funny and chaotic climax ends the film on a happy note.

Prince is ok as the main lead but needs to work on his acting skills. Heroine Jyothi Sethi is decent. All the scenes featuring comedian Madhu and Prince have come out well.

Sampoornesh Babu is hilarious in his role of Ghantasala. He evokes superb laughs during the climax along with Jaya Prakash Reddy. Saptagiri is ok in his cameo and so is Rao Ramesh as the bad guy.

First half an hour of the film is routine and lacks direction. The movie starts on a boring note as all the characters make an entry without clarity. Right up to the last ten minutes of the interval block, the film is dragged with Prince’s love track.

Even though Madhu is decent, he goes over board in many scenes during the second half. Story of the film is quite routine and has been dealt many a times before.

Songs cause a hindrance to the film and could have been easily removed. The film has a roller coaster effect as the movie keeps getting better with certain twists but gets bogged down with some boring scenes.

Music is below average and all the songs could have been removed. Camera work is pretty good and so is the art direction. Production values are decent as the makers have not compromised on the number of artists selected for tiny roles.

On the whole, Where is Vidya Balan has some entertaining moments. Interesting second half, Samporrnesh Babu’s comedy and a hilarious climax save the film from sinking. If you manage to sit through the slow first half, you can easily give this passable crime comedy a shot.