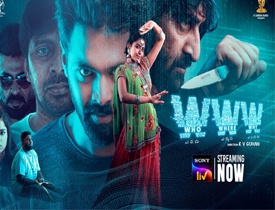 ‘WWW’ has been in the making for a very long time. The film directed by KV Guhan has been released on Sony Liv. Let’s see how it is.

Viswa(Adith Arun) is an illegal hacker who earns money by the wrong means. He falls in love with Mitra(Shivani Rajasekhar). Just as he plans to win her love, a series of events take place. A person, who loses everything due to Viswa’s hacking, plots revenge and creates havoc in Viswa and Mitra’s life. Who is this person and how he troubles Viswa is the basic story of the film?

The backdrop of cybercrime looks good in the film. Also, the manner in which a new angle in cybercrime is showcased looks interesting. Thrills related to this aspect have been showcased well in the second half. The tense moments showcased in the pre-climax are good.

Adith Arun is a sincere actor but does not get his due. He does well in this film and showcases very good emotions. In a scene where Shivani gets stuck with the villains, Adith shows superb emotions. Shivani Rajasekhar is improving with each film of hers and does well here. Satyam Rajesh and Priyadarshi do well in their roles.

The love track between the lead pair looks forced and bores the audience. It does not have any connection with the story and some scenes in the first half miss the logic in a big way. The so-called physiological scenes do not work one bit.

The screenplay and narration for the most part of the film are not gripping. Though the story had good scope for drama, the director failed to use it. Though the twists are good, they do not create much impact. The film is filled with unwanted scenes and drags the second half.

The music in the film is passable but the BGM was decent. The camerawork is decent but the mixing was not that great. The editing of the film is crisp and the production values were good. Coming to the director Guhan, he has taken a good subject, but his narration misses the mark.

On the whole, WWW is a cybercrime thriller with a decent backdrop. However, logicless scenes, slow narration, and lack of depth in emotions take the film down in no time and make it a below-par watch this weekend.