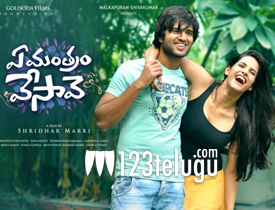 Vijay Devarakonda’s long-delayed film, Ye Mantram Vesyave is finally out in the open after five long years. Let’s see whether it impresses us or not.

Nikki(Vijay) Devarakonda) is a gaming enthusiast who is very irresponsible in life. He flirts with girls and wastes all his time just hanging out with his friends. One fine day, he meets a girl called Rags(Shivani Singh) online and decides to woo her at any cost. He makes multiple attempts but fails most of the time. Seeing his enthusiasm, Rags gives him a chance and challenges him to find out about her in a video gaming kind of scenario which has multiple levels. Vijay accepts the challenge and starts his search. How does he manage to meet Rags? and what problems does he face in all this is the entire crux of the story.

Vijay Devarakonda is the only solace of the film as he does a decent job in his role. Though he looks quite young and inexperienced during the time he shot the film, by the end of it all, his performance is the only thing which manages to stand out.

Heroine Shivani Singh has a major role as the entire film revolves around her. She looks good in certain scenes and does her job well. The basic concept of finding the heroine in a video game kind of a scenario has been thought off quite well. The second half is where the actual story starts and has some engaging moments.

The narration of the film is very naive as there are no gripping moments which keep the audience hooked on to the seats. Even though the concept looks good, the way the gaming world and the story weaved around it look a bit over the top.

Though the twist that is showcased during the end justifies the whole plot, the way things are narrated to this point lack the depth.

For about halftime into the film, you do not know what is going on as some silly thrills are showcased one after the other. Yet another biggest drawback of the film is the lack of good supporting cast. The villain looks silly and does not bring any depth to the proceedings.

Production values of the film are below par as the visuals look clearly outdated. The technology showcased is outdated in the current scenario and this gives an old look to the film. Editing is okay and so was the background score. Dialogues are decent and so was the art direction. Coming to the director Sreedhar, he has done a below par job. As he is a software engineer himself, he has written the plot well and tries to showcase how the youth is getting sidetracked with the misuse of technology. But his narration lacks the focus as he does not manage to generate any interest in the proceedings regularly.

On the whole, Ye Mantram Vesyave is a film which Vijay Devarakonda needs to shrug it off from his system right away. Though it is a very old film of his which has released now, there is nothing much which the actor can boast about it. Except for his performance and interesting concept, this film does not give the necessary kick which is expected of Vijay’s movies and can be watched comfortably when it is aired on TV.