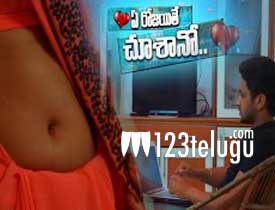 Continuing the trend of low-budget films, a new youthful entertainer which has hit the screens today is Ye Rojaithe Chusano. Lets now see whether it manages to impress or not.

Balu(Manoj Nandan) is a college going youth who falls in love with Aditi(Smitikacharya). Like in every other movie, heroine Aditi too is not interested in love and marriage because of her troubled past where she had bitter experiences. Rest of the story is as to how Balu goes after Aditi and convinces her to accept his love.

One of the biggest plus points of the film is the twist that comes post the interval. The scenes which feature the major star cast during this time have been executed quite well and are interesting. The reason which showcased why the heroine hates love has been dealt well.

The love track between the lead pair has been designed well. Some scenes which showcase the problems and how the couple deals with them are handled nicely. Hero Manoj Nandan is quite impressive and has done a decent job in his role.

The film is filled with many unnecessary scenes and characters which enter the scene without any reason and irritate you to the core. Many important and crucial scenes in the film look forced and do not bring any depth to the proceedings.

The comedy generated between the lead pair and their friends are so boring that you feel suffocated. The climax of the film is hugely disappointing and has been wrapped up in a hurry.

Narration of the film is quite bland and has absolutely nothing to offer. The film lacks basic depth and the emotions showcased look over the top and artificial.

Music by Sasi Kiran is decent and impresses to a certain extent. Editing by Nandamuri Hari is pathetic and does not help the proceedings one bit. Production values are just about okay but the camera work was horrible and gave the film a bad look. Coming to director Bala G, he has done a bad job with the film. His narration is quite disappointing as none of the important scenes have been handled well.

On the whole, Ye Rojaithe Chusano is a boring and disappointing youthful entertainer. Bad comedy, lack of basic flow and some outdated scenes kill this film completely. Except for a small twist which comes during the second half, this film has nothing going its way and can be left alone this weekend.