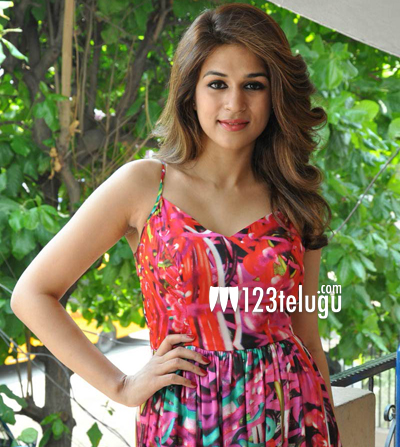 Shraddha Das is one of the glamorous actresses in Tollywood who has sizzled in many movies.Her latest flick ‘Rey’ is gearing up for a release on 27th of this month. We have caught up with her for a brief chit chat. Lets see what she has to say.

Q) Tell us about your character in Rey ?

This is the first movie for me with a full length role as a female lead. I will be seen as a pop star. My role has negative shades along with some glamour and style included in the character. My character is equally important to that of the hero’s character. I really thank the director Y.V.S Chowdary for giving me such a wonderful role.

Q) Give details about the Pop star character ?

I am a big pop star from Mexico and my name is Jenna. I am a three year champion and come across ‘Rey’ band group as an opponent. My character has some mass dialogues due to its negative shade.

Q) What suggestions did director give you ?

He designed this character very well and insisted that I closely observe the current pop stars like Jennifer Lopez and Britney Spears. I really worked hard for this role and my director helped me improve my performance and I hope that this powerful character will give me a good break in my career.

Q) Will this character have a glamour touch to treat the audience ?

I dont think I have a huge fan following but surely this character has the glamour touch which will entertain the audience. I look pretty glamorous and stylish in this role.

Q) Tell us about Sai’s performance in this flick?

Sai Dharma Tej is a very dedicated actor. He has got great memory power and he has shown good maturity in his performance. This is his debut movie. He has developed very well and recently, he danced to the pawanism song with a lot of energy.

Q) Will you continue to do glamorous roles and item songs?

I have no problem in doing glamour roles and item songs but I will select good roles which will help me in gaining a good position in this field.

I am currently working with Sachin Joshi in a film titled Haunting of Bombay Mills. I have not yet signed any other movies in Telugu.