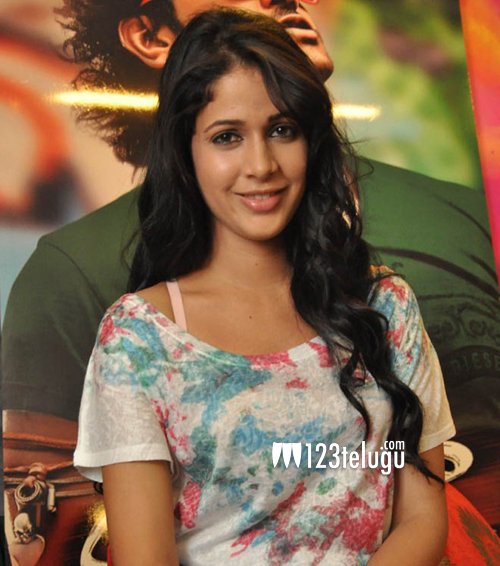 Lavanya Tripathi made her debut with the film ‘Andhala Rakshasi’. Though the movie did not fare too well at the Box Office, Lavanya was appreciated for her looks as well as her performance. In fact, her role became so popular that till today, she is referred to as Andhala Rakshasi Lavanya.

Lavanya is now getting ready for the release of her second film, opposite Manchu Vishnu. The movie’s name is ‘Doosukeltha’ and it is getting ready for a release this Dussehra. Lavanya interacted briefly with members of the press today. Read on to see what she had to say.

Q. What can you tell us about your role in ‘Doosukeltha’?

A. In ‘Doosukeltha’, I play the role of Alekhya. She is a very sweet and humble girl. But she is also strong, self reliant and resourceful. She has a very caring nature.

Q. What about Vishnu’s role?

A. I call Vishnu ‘Chinna’ in the film. Basically, Vishnu’s character is that of a very smart and talented guy who has a solution for everything. We are childhood friends in the film. Beyond that, I think Vishnu will be the right person to answer your question (Smiles)

Q. Your second film is a mass entertainer. How did you adapt?

A. Well, I was in the company of very talented people and they helped me adapt easily. Compared to my first film, my role has a little more glamour in this movie. This role is also more mature. People thought I could act only in ‘art films’. I wanted to prove them wrong (Smiles)

Q. How do you choose your scripts?

A. Well, first of all I should connect to the story and my character should have some importance. These are the things I look for. Commercial aspects etc. do not bother me too much. I also like to try out different things and I don’t like to slotted into one image.

Q. The film seems to be a comedy entertainer. Was it tough to act in comedy sequences?

A. (Thinks). It was not too tough actually. The comedy sequences in this film are all natural. There is situational comedy in this movie, so nothing appears forced or artificial. Working with Brahmanandam sir in this area was such a learning experience.

Q. What can you tell us about Vishnu?

A. Vishnu has been a wonderful co-star and he was very supportive. He never ever made me feel small, even though he comes from such a famous family. On set, he was quite jovial. It was great fun working for this film. Vishnu’s daughters Ari and Vivi are two angels. They used to give me so much energy whenever they visited us on the sets.

Q. Veeru Potla is a commercial director. What can you tell us about his working style?

A. Veeru Potla is a very nice human being. He is also very considerate and he made me understand things. He is a very good director and I learnt a lot from him.

Q. You are quite fond of dancing. Did you get to showcase that in this film?

A. Yes (Smiles). I love dancing and I was able to showcase my dancing skills with this film. Initially, I felt a little apprehensive about the mass numbers as I am more used to Indian classical dance. But I became good at it and I had fun. Prem Rakshith composed some really awesome numbers.

Q. Many people think you are a Telugu girl..How do you feel?

A. It feels very nice. In fact, most people think I am Lavanya Tirupathi, whereas my name is Lavanya Tripathi. But I feel good. Telugu girls are very pretty, so that is a complement. I am quite comfortable with the language and I can read and understand all my dialogues.

Q. What according to you, are the highlights of ‘Doosukeltha’ ?

A. ‘Doosukeltha’ is a perfect entertainer. There is action, comedy, romance and sentiment. Viewers will have a lot of fun with this film and I am very confident about it.

With that, we ended our conversation with Lavanya. She is flying to Europe soon, for the shooting of her Tamil film. Let us wish her the very best for ‘Doosukeltha’.