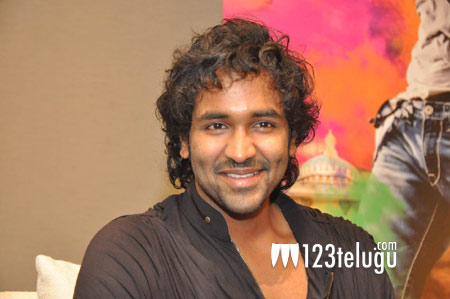 Manchu Vishnu is getting ready to hit the screens with ‘Doosukeltha’ in a few days time. The movie is carrying a positive buzz and Vishnu is banking on this film big time. The movie has Lavanya Tripathi as the heroine and Veeru Potla has directed it. Vishnu interacted with members of the press today and spoke at length about his film. Read on to see what he had to say.

Q. How did Doosukeltha happen?

A. Manoj was the guy who recommended this film to me. Dad also liked the film. I trusted their judgement and went on to the sets without even listening to the story completely. As the film progressed, my interest in the project grew. Veeru has done a very good job with the dialogues and one liners.

Q. Did you show the film to anyone?

A. Yes. I showed the movie to Dasari Narayana Rao garu, B.Gopal, Sreenu Vaitla, Srivas, Vinni and Nageshwar Reddy. They all liked it. Dasari garu praised me for my performance in the film and he liked the movie. The other directors expressed similar sentiments. I felt relieved after that.

Q. How has your role shaped up?

A. My role in the film is quite entertaining. There is a good deal of action and comedy in the movie. Fights and dances will be a big asset for me this time. I have worked very hard for this project.

Q. You seem to take a lot of risks for action sequences?

A. Yes. But the risks I take are calculated risks, just like every other hero. I have a family to come back to. I try to set the bar for action sequences. I did some risky stunts for my first film ‘Vishnu’. When some other hero does a better job, it motivates me to do something even more exciting for my next project.

Q. Are you interested in coming up with a six pack frame?

A. (Smiles) Go to Vijayawada and check the rickshaw pullers. Or go to the outer ring road, where you can find labourers hammering away at rocks. They have the best six pack bodies. Their muscle definition is excellent. I am not after a six pack frame. My aim is to develop a very athletic body. I want to have one of the most athletic and fit bodies among Indian heroes. I think I have reached about 30% of that target. I will hopefully get there soon.

Q. Are you happy with Manisharma’s work?

A. Absolutely. He has done a superb job with the background music. To be honest, I was not too happy with the BGM for ‘Vasthadu Naa Raju”. When I asked Mani Sharma about it, he said “The story does not have scope for anything more than this”. Luckily, he did not say anything like that for ‘Doosukeltha’. For me, his best BGM work can be found in “Ramanna Chowdhary”.

Q. Will you go into politics?

A. (Smiles) I think there are enough politicians in my family. There are politicians on Vinnie’s side. Dad is keen about it,though he is not actively involved at present. For me, doing good to the society is more important. That is the reason why I have adopted 10 villages near Tirupathi. I am trying to address problems like garbage removal and lack of proper toilets. If my work can inspire a few other educational institutions to adopt villages, Andhra Pradesh will be a very different place.

Q. How is ‘Ravana’ shaping up?

A. Ravana is a very ambitious project for me and we are planning to get it done with international technical standards. Pre-production work will formally begin from December and we may release a press note after Sankranthi.

With that, we ended our conversation with Vishnu Manchu. Let us wish him the very best for his upcoming film ‘Doosukeltha’, which will hit the screens on the 17th of this month.