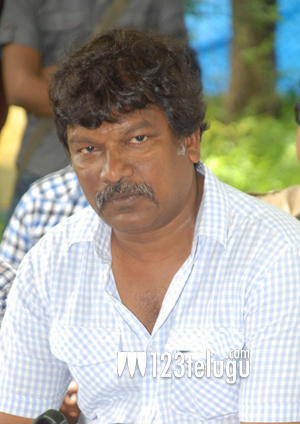 Ace director Krishna Vamsi, is considered as a creative genius in Tollywood. All his films are full of life, and close to reality. His latest offering is the family entertainer Govindudu Andari Vadele. Starring Ram Charan and Kajal Agarwal, this film is set for a October 1st release. We caught up with Krishna Vamsi for an exclusive interview. Let’s see what he has to say.

Q) Now that your film is wrapped up, how relaxed do you feel ?

I’ll feel relaxed only when my film successfully reaches the audience. Right now, I am completely engrossed with the post production formalities, which are huge key for any film.

Q) GAV is opening during the festive season. What kind of box office results are you expecting ?

My job is to only direct. These box office collections, profits and the financial part will be taken care by my producer. I make movies out of passion, and not for monetary gains.

Q) What was the thought process behind making a film like GAV ?

As some of my past flicks did not do well, I was contemplating on what to do next. That was the time, I decided to make a film on family values and human relationships.

Q) Charan has mostly done action entertainers. How has he performed in this family entertainer ?

I never saw Charan as an action hero. For me, he is an complete actor, who was a perfect fit to lead my film filled with huge human values. How different is he going to look or perform, you need to wait till the film’s release to find out.

Q) You have known both Chiranjeevi and Charan from close quarters. What major difference did you find between the both of them ?

Charan always reminds me of Chiranjeevi garu. All the good habits and behavior that Charan possesses, are inherited from his dad. Acting wise, both of them have quite a different style and approach.

Q) Is Srikanth doing a negative role in the film ?

No ! it is not a negative role. Srikanth plays a typical spoilt village brat, who is very aggressive and rebel in nature. His role is very important to the film, and he has done a wonderful job.

Q) Did the last minute inclusion of Prakash Raj help your project ?

Oh Yes ! I share a love and hate relation with Prakash. He is one of the most well read and superb actors that can be molded into any character. He will just give you the best, and will add a lot of depth to the entire film.

Q) What do you think is going to be the highlight of GAV ?

The human emotions and family bond, which is missing in today’s generation will be the highlight of the film.

Q) What was the reaction after Chiranjeevi watched the film ?

I showed the final cut to both Chiranjeevi garu and his wife. By the time the movie came to an end, there were tears in both their eyes. I felt very happy that without the proper re-recording and the background score, my film managed to move them so much.

Q) Reports reveal that last half an hour of the film will be the major highlight. What do you have to say ?

The entire film will be highly entertaining, and especially the last 30 minutes will be hugely emotional.

Q) Tell us about Bandla Ganesh and his production values ?

He is on the best producers I have worked with. I had complete creative freedom during the making of this flick, and got what ever I asked for.

As of now, I do not have anything in the pipeline. Once I am done with GAV, I will think of something else.

With that we wrapped up our exclusive interview, and wished Krishna Vamsi the best of luck for his film.