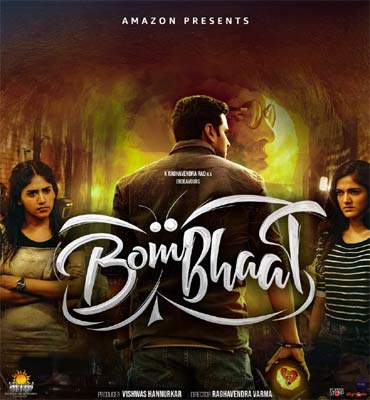 Amazon is releasing some low budget Telugu films as well in the last few weeks and the next in line Bombaat, a Telugu film directed by Raghavendra Varma. We caught up with the lead pair, Sushanth Reddy, Simran Chowdary, and the director for an exclusive interview. Here is the transcript.

The film’s director, Raghavendra Varma says that the film is all about a humanoid robot and what kind of problems does it create in the lives of the lead pairs played by Sushanth Reddy, Chandni Chowdary, and Simran Chowdary. The film has a unique theme and also has some seasoned actors doing lead roles.

Tell us about each of your roles?

Sushanth says that he is playing a college-going youth who is in love with Chandni’s character. How a person like him who is filled with bad luck comes across this humanoid robot and how it changes my life. Simran says that she is playing the humanoid robot which is half human and half robot. Adding further, Simran says that she had a tough time playing the role as she had to behave like a human in many scenes and quickly change gears to normal mode. This was quite physically taxing for her.

What are the highlights of Bhombaat?

The director Raghavendra says that the film has a science fiction angle. The manner in which it is narrated with good entertainment and easy to understand for all kinds of an audience is the best part. Also, the presence of noted stars like Makrand Deshpande and Tanikella Bharani in key roles will be quite good to see.

Tell us about the roles of Chandni Chowdary and Priyadarshi roles?

Chandni plays the love interest of Sushanth and she has a very good role which is quite different from what she does. Priyadarshi plays Sushanth’s friend and he too is linked nicely in the story. Both of these actors are quite key to the film.

Sushanth and Simran, tell us about your career plans?

Post Ee Nagarainiki Emaindi, I am looking at doing different roles. I have a very good role in this film and have pinned all the hopes on this film so that I could get more offers says Sushanth. Coming to Simran, she says that this is a solid role and the best way to prove that she can act. She also has a good role in Nithin’s Check and has pinned a lot of hopes on that film.

Where did you get the idea to make such a film?

Director Raghavendra Varma says that not many know that there is a humanoid robot called Sophiya in Dubai. I happened to see an interview of Sophiya along with Will Smith and was fascinated by it. So, I wrote a story of how things change on a small level when a scientist makes a humanoid and how it affects the lives of the lead characters.

About Amazon releasing the film?

We had close to 6 screenings for the film to date and many in the industry are appreciated our film for our different attempts. As far as Amazon releasing it on a wider note, this is the best we could get during this time of the pandemic.

With that, we ended our interview with the team of Bombaat and wished them the best of luck for their future projects.