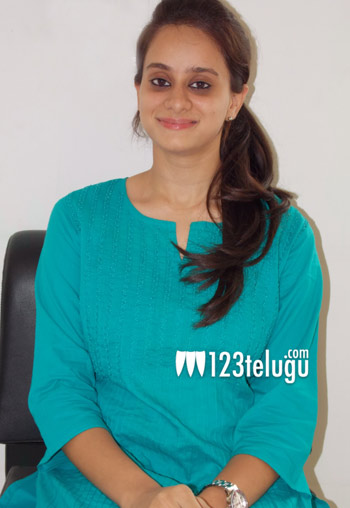 Veena Ghantasala is the exciting new name that has emerged in the field of dubbing. Very few know that she is the grand daughter of legendary singer Ghantasala and the daughter of noted dubbing artist Ratna Kumar. Veena is a trained singer, and is the new flavor of Tollywood dubbing artists. We caught up with this multi-talented artist for an exclusive interview. Let’s see what she has to say.

Q) You belong to such a prestigious film family ? Why did it take so long for you to join films ?

A) Initially, I wanted to finish my MBA and then get into films. Initially I started giving voice for dubbing movies. After gaining a bit of experience, I decided to do something big. That is when I contacted Pappu from Shabdhalaya theater. I introduced myself, and asked him if there was anything interesting happening. He asked me come over to Hyderabad, and do a voice test for Nenokkadine and Heart Attack. I got selected for Heart Attack, and went on to dub for Adah Sharma.

Q) How was the response after your first film, Heart Attack went on to become a hit ?

A) I was very surprised to see my work being recognized. It’s only the stars who get popular after a hit, but the public liked my dubbing immensely and even told me that my voice elevated Adah’s character in the film.

Q) How do you go about dubbing for heroines. How tough is it ?

A) The director gives me a brief detail about the role, and from there on, I go according to the lip sync and the situation of the scene.

Q) You have worked in both Tamil and Telugu industries, What difference do you find ?

A) In Tamil, only the stars in front of the camera get noticed, but in Tollywood even artists who are behind the camera like me, get good credit.

Q) You happen to be a singer also. Have you done playback for any movie ?

A) Yes ! I have already sung one number in Andala Raakshashi. I am currently learning Karnatic music and hopefully you would see me singing more songs in the future.

Q) You have pretty good looks too, Did you ever think of doing films or Television ?

A) After the success of Heart Attack, I was offered quite a few TV shows. As I wanted to establish my dubbing career first, I did not take them up. Hopefully in the future, you might see me doing Television.

A) I have already finished dubbing for Saheba Subramanyam, and am currently dubbing for Bandla Ganesh’s Nee Jathaga Nenundali.

Q) Speaking of Nee Jathaga Nenundali, which is the remake of Aashique 2, the heroine has quite a tough role. How are you going about it ?

A) Yes ! You are true. The heroine goes through a lot, and there is so much of sobbing and pain in the character. I am finding it pretty tough, but once the film releases, I will surely be noticed even more.

Q) Who are your favorite dubbing artists ?

A) My father Ratna Kumar, and Kavita are two of my favorite inspirations for dubbing.

Q) How are you balancing your career in both singing and dubbing ?

A) I am taking baby steps in singing currently, and would like to pursue a full time career in the filed of dubbing.

Q) Do you have any particular actresses for whom you want to dub for ?

A) I don’t want to get typed casted for one actress, and would like to dub for everyone in the future.

With that we ended our interview and wished Veena the best of luck for the future.