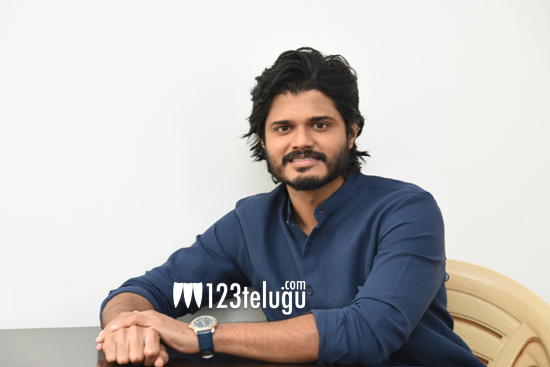 Anand Devarakonda is ready with his latest film Pushpaka Vimanam. On the eve of the film’s release, we caught up with Anand for a detailed interview. Here is the transcript.

Why did you choose the title Pushpaka Vimanam?

Pushpaka Vimanam was one of the titles chosen for the film. As we liked the sounding and the way the hero’s character goes through crazy issues, we thought that the title would be apt.

Director Damodara knew my dad for a long time now. When my dad came to know that several heroes rejected this film, he asked me if I would be interested to listen. After the narration, even I was not confident. But the moment we did the look test, I felt the vibe and said okay.

What is the whole film about?

The film is about a government school teacher whose wife elopes after his wedding and he gets into all sorts of issues due to his middle-class surroundings. The humor generated through the hero’s helplessness is the whole story.

As I said, I play a very simple and soft-spoken school teacher who is taken for a ride by his wife and the investigating officer played by Sunil. All my confrontation scenes between me and Sunil will be hilarious. I did a small workshop before going to the shoot.

How much of Vijay Devarakonda’s influence is there on your story selection?

My brother is always there for support. But he does not select my stories and asks me to go through them. As he is the producer of some of my films, he is more into the promotion side.

The idea behind playing the boy next door roles?

I know my strengths well and cannot do commercial films. So, I chose films that have content and are near to the daily lives of people. Middle-Class Melodies, Pushpaka Vimanam, and the other three upcoming films will showcase me as a boy next door only.

I am doing KV Guhan sir’s next which is a thriller. Also, I am doing a film where I play an auto driver. I am also listening to other stories as well.