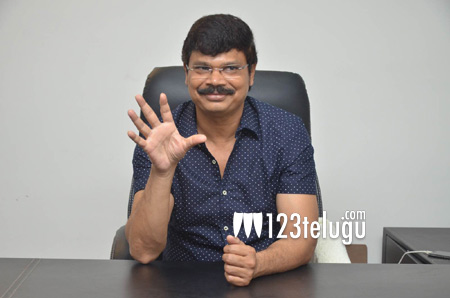 Boyapati Sreenivas is busy with the last minute arrangements of his new film Jaya Janaki Nayaka. On this occasion, we caught up with him for a detailed interview. Here is the transcript.

How is JJN going to be?

The film will be on the lines of Bhadra and will be an out and out romantic drama with my style of action. As I got an image of a mass director, I couldn’t do such films for a long time. But when I had dates of Srinivas, I felt it was the right time to attempt a film like this. Everyone will see a new side of me through this film. JJN will impress every section of the audience for sure.

Do you think Srinivas will match up to your style of mass action?

I design roles and action drama depending on the hero I work with. I clearly see whether the hero can carry the intensity or not and then only design a story around him. Even with Srinu, I only developed his role which looks believable and that too in my sensibilities.

About the huge competition during the release time?

I am not tensed at all as I have a very good product in hand which will do quite well. I also feel that it is up to the audience to decide. If the film is good, they will automatically watch it.

Are your issues sorted with DSP?

Laughs! See, having a difference of opinion is a part and parcel of every friendship. DSP is a close friend and has worked on four films of mine and knows what I expect of him. Even for JJN, he has done a superb job with the music and background score.

Why do you always work with stars?

I feel that having noted faces in my film will create a huge edge for the movie. The more artists there are, the richer the film looks. It is my philosophy and I go by it completely.

Will the film live up to the expenses that the distributors spent for the movie?

I know that Srinivas is a new hero and the distributors have spent a lot on him. But at the same time, they are not dumb and have bought the rights only after a lot of calculations and agreements.

The young boy has worked sincerely and did his role exceptionally. He worked hard on his body and also showcased some beautiful emotions. I am very confident that Srinu will walk away with a lot of praise with JJN.