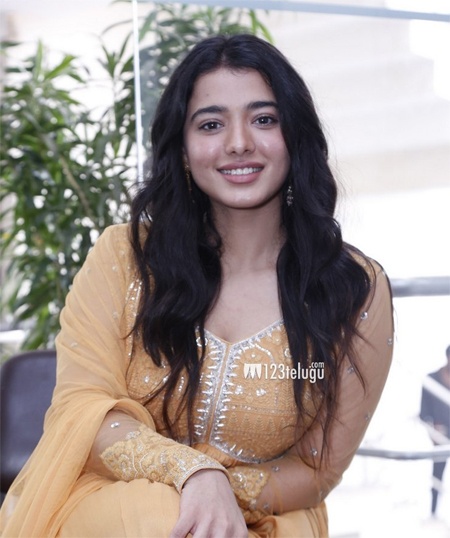 Mega hero Vysshnav Tej is pairing up with Ketika Sharma of Romantic fame for the family entertainer Ranga Ranga Vaibhavanga. The film is helmed by Giresaayaa and produced by BVSN Prasad. It will be hitting the screens this September 2nd. Ahead of the film’s release, we interacted with the film’s lead actress Ketika Sharma. Here is the transcript.

Tell us about the good quality of VysshnavTej?

Vysshnav has a humble air around him. He is very simple and I like it the most about him. I remember when we were shooting he just sat down on the road between the shot gap and he kept chilling. That’s the quality I like in him.

What elements in this script attracted you?

I wanted a film that would take me directly into the family audience as both my earlier films fall under different genres. An entire family can go watch and enjoy Ranga Ranga Vaibhavanga. It will connect to all age groups. As I was looking for such a family film this movie came my way.

How will be your characterisation in the film?

I am playing Radha who is a very loving and honest girl. She has a balance between practicality and emotions. There would be her love life, family life and career showcased in the film. She puts her heart into everything she does and I relate to that character.

How was it working with a huge star cast?

I worked with Prabhu sir, Naresh sir, Tulasi mam, and Pragathi mam in the film. When we have such senior actors around us, they will always advise us to perform a scene in a better way. I got to learn a lot from them. It was lots of fun working on this film with all actors.

Did you do any homework for playing the medico character?

My parents are doctors. My dad always wanted me to become a doctor. I told my father that he can get to see me as a doctor in this film. My interest is always in acting.

How do you analyze the movie results?

I don’t get attached to the movie results. Like any other artist, I wish my films will do well. But that wouldn’t be in my hands. I am happy with what I am doing and I shouldn’t regret doing a role.

My entire focus is on cinema. I don’t have any thoughts about acting in OTT as of now. If an exceptional story comes my way I will think about it. Few films are in the discussion stage. I will reveal the details of them very soon. My dream is to act in biopic films.