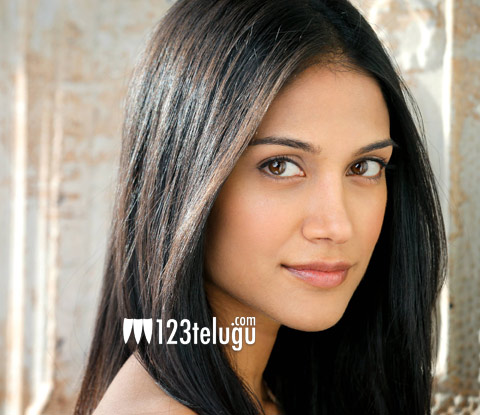 Q) Please tell us about yourself. What’s your background like?

A) I was born and brought up in Chicago but my family is from Kerala. While I was growing up, I was a martial artist, a pianist, a dancer, and also very much into math and physics. Later, I attended Stanford University and earned my degree in Mechanical Engineering, but eventually I decided to leave the engineering profession and became an actress. It’s been one of my childhood dreams. Acting is now my full time profession, but I also am involved in a lot of charity work.

Q) How did you become a part D for Dopidi?

A) I was in Hyderabad for a screening of an independent film I acted in – Love Lies and Seeta. Afterwards, I was approached by the filmmakers Raj and DK about their film D for Dopidi and the role of Shalini.

Q) How was it doing a film in an industry that is far from what you were doing in LA?

A) The whole experience was quite foreign to me and it took me a while to adjust to the new environment. The language barrier was a challenge at first. Moreover, there was the discomfort of not having any friends or family in Hyderabad. However, the D for Dopidi team was amazing. They made me feel more than welcome and and took great care of me. And in the end, I developed a great appreciation for Hyderabad and the Tollywood industry.

Q) What do you think of the D For Dopidi Team?

A) Everyone was a pleasure to work with. Raj and DK are visionaries and they did a superb job of pulling all this together. Siraj was quite friendly and he was extremely easy to work with. Sundeep, Varun, Naveen, Rakesh – working with all of them was so much fun and they are all quite talented. It was a blast shooting for this film.

Q) Did you prepare for your role, especially since it’s a Telugu film? How did you manage the Telugu dialogues?

A) I only had a few days to prepare. In fact, I hadn’t seen the final script or my dialogues until I landed in Hyderabad (from LA) just two days before I had to shoot my first scene. Luckily, I didn’t need to do much work on my character of Shalini. Since I’m not fluent in Telugu, learning the dialogues was a big challenge to accomplish in such a short time. I worked with Siraj, the director, and other team members to get the language down as best I could. It was hard at first, but became easier as the days went on.

Q) What did you think of the film D For Dopidi, when you finally watched it on screen?

A) I was really impressed how everything came together – the comedy, the music, the cinematography; it was all top notch. I saw it at a screening in Chicago with my family and we all loved it. And I was proud that the Chicago audience was loving the movie too.

Q) Will you be doing more films in India/Telugu?

A) I’ve been approached on a few, but I’m just waiting for the right one. It’s challenging since I also have projects in the US. But I’m trying to find a balance between both industries.