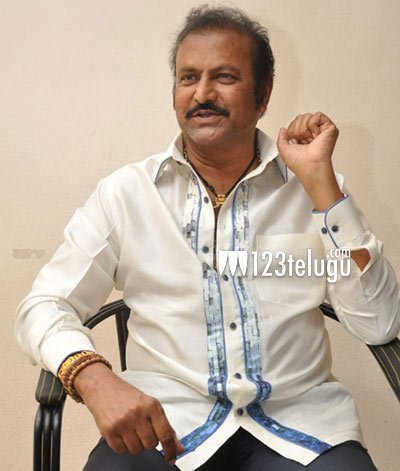 After a long gap, Mohan Babu will be seen in quite an entertaining role in his upcoming film Mama Manchu Alludu Kanchu. The film is up for release this Friday and on this occasion, we caught up with the legendary actor for a brief interview. Here is the transcript.

Our film is a feel good family entertainer which has every thing for every section of the audience. You can push aside all your personal problems and happily watch this film and welcome the new year in a happy way.

Q)Why did you choose a remake ?

Two years back, I watched the original when some one suggested me about it. Even though I did not understand the language, I connected deeply with the fun element and showed it to Srinivasa Reddy and decided to remake it.

Q)Why did you choose Srinivasa Reddy as the director ?

Srinivas is a brilliant director and has good comic sense. He was supposed to do a film with Vishnu which could not shape up. So we decided to go ahead with this remake.

Q)What made you choose Allari Naresh ?

Initially, I wanted to cast any of my two sons but later felt that the combination would not work. The first name which came to my mind other than my two sons was Allari Naresh. As soon as we approached him, he said yes and the project was on floors.

Q)How was it working with Ramya Krishna and Meena after a long gap ?

I had a lot of fun working with them. All of us shared a wonderful chemistry during Allari Mogudu and this film is like an extension of where we left off.

Allari Naresh and my combination, the hit pair of Allari Mogudu and a hilarious story line are major assets of this racy family entertainer.