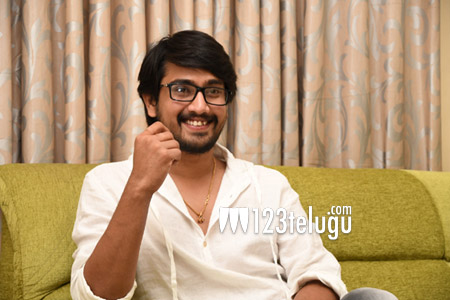 Young hero Raj Tarun, who is riding high with the success of his last outing, Kittu Unadu Jagratha, is coming up with yet another youthful entertainer titled Andhhagadu. The film is releasing on June 2 and on this occasion, we had an exclusive interview with Raj Tarun. Here is the transcript:

Q) Tell us about Andhhagadu film?

A) It is a complete fun entertainer. It has all emotions like love, thrill, and comedy. Overall, it is a very good family entertainer.

Q) How different is this film from your previous films?

A) I did my previous films in various genres, but this film is completely different. For every fifteen minutes, the genre gets changing and the story has very good twists in it.

Q) You did a visually challenged role in this film, wasn’t it difficult while acting?

A) No, I was comfortable while portraying this role. Moreover, the visually challenged character will last for only forty minutes in the film.

Q) Whose decision was it to choose Veligonda Srinivas as the director?

A) After listening to his complete narration, I felt that he should only direct this film. As I said, the film has a lot of twists and turns, and if he directs it, the same feel and emotions will reflect on the screen. So I insisted him to direct the movie.

Q) What is your feeling after getting back to back successes?

A) For me cinema is everything. I feel bored if I don’t have shooting for one day. So I wish that this success continues for a long time.

Q) Nikhil is a good friend of yours. Are you having any plans to do a multi-starrer with him?

A) Yes. Nikhil is a good friend of mine. We always think of doing a film together. If a right script comes in, I’m ready to do a multi-starrer with him.

Q) How do your select the stories?

A) I do not bother much about the story. I’m ready to listen to any kind of scripts and If I like them, I will proceed immediately.

Q) What do you expect from a new director who comes to you to narrate a story?

A) As I said earlier, I do not have too many obligations about the story. If I like the script, I will immediately take it to the sets. I never insisted directors to come up with a particular genre of scripts.

Q) How far will the special premiers help the film?

A) Actually, its the maker’s decision. There is no special planning for it. If the film is good, our audiences are ever ready to spread the positive WOM and moreover, the film’s result will be known a day earlier (laughs).

Q) How do you think Andhhagadu will be helpful to your career?

A) This film is definitely helpful to me and I hope that it works out big-time.

Q) Tell us about your forthcoming projects?