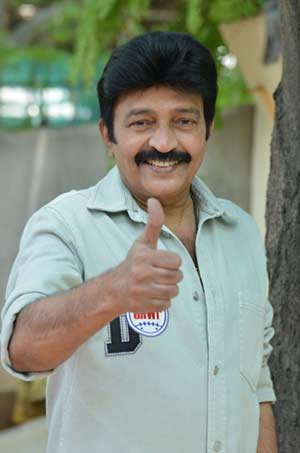 Rajasekhar is ready for the release of his new film Shekar which will be out soon. On this occasion, we caught up with him for a detailed interview. Here is the transcript.

I am super tense about the film’s release. I have put all my money into this film and if it flops, I will be in neck-deep problems. Having said that, I am also confident that the film will click at the box office as the content is strong.

What made you choose Joseph as a remake?

I have done so many remakes in my career and most of them have been good hits. When I came to know about Joseph, I felt it would be a perfect role for me to showcase my acting skills at this age.

The best compliment you received for this film?

Sai Kumar has dubbed my voice for a long time and only when he likes my films, does he calls me. After a long time, he called me and said that Shekar will be a good hit at the box office. His words gave me a lot of confidence.

Working with your daughter Shivani?

When this role came up, Jeevitha suggested that one of our daughters should do it. Both Shivani and Shivatmika wanted to do it but finally, Sivani was roped in. All our scenes have come out quite well and will be one of the highlights of the film.

I have gone through hell after getting affected by Covid. I was on the death bed and was even shivering while passing urine. Such was my stage. But the way my wife and daughters took care of me, I am indebted to them all my life. Everyone prayed for me and by the grace of God, I got back with the urge of completing my film and here I am with the release.

As I play a person over 50, we decided to have a salt and pepper look for this film. Initially, I was a bit hesitant to have but as time passed by, everyone liked it so much. Once the trailer was out, my look got a tremendous response and now I am very confident.

Working with Jeevitha, the director?

Once we are on set, I treat her like a director and take her input seriously. She too does not beat around the bush and corrects me when I am wrong. Coming to this film, she has done a great job and remade this film without losing the soul of the original.

Once this film is done, I have a couple of films lined up and my daughters will also be a part of them. Very Soon, we will make an announcement.