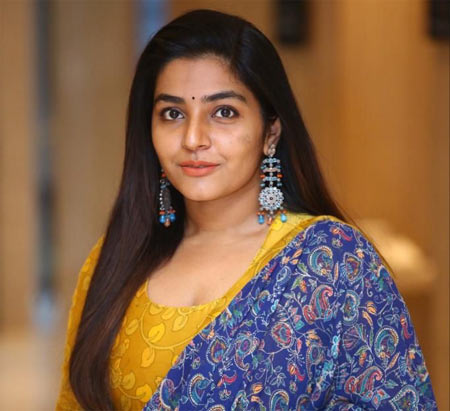 Rajisha Vijayan appeared in critically acclaimed films like Karnan and Jai Bhim. She is playing one of the female leads in Mass Maharaja Ravi Teja’s Ramarao On Duty which is produced by Sudhakar Cherukuri and directed by Sarath Mandava. The action thriller will be hitting the screens on 29th July. Ahead of the film’s release, the actress gave a media interview sharing her experience. Here is the transcript.

How did you get the opportunity to work in Ramarao On Duty?

After watching my Tamil film Karnan, director Sarath gave me a call to explain this project. I will be seen as Malini in Ramarao On Duty. The director narrated a wonderful story to me. My character will be strong. I felt that the story and character needed to be strong while getting introduced to another language. I found what I was searching for and I am very happy to get launched with this film.

How was your working experience with Ravi Teja?

I have grown up in North India. I used to watch Ravi Teja’s Hindi dubbed films. All my friends knew Ravi Teja. These days we are talking about PAN India, but Ravi Teja had PAN Indian reach from earlier days. It was really great working with them. He is a superstar and a great mass hero. It feels like lightning when he comes to the sets. The entire set will be filled with energy. He treats everyone equally.

How was your working experience with director Sarath?

Sarath is a perfectionist and he has full clarity. One needs a lot of clarity to make a film like Ramarao On Duty that has many elements like action, entertainment, dance, etc. Sarath is one such person.

What differences did you observe between the Telugu film industry and the Tamil and Malayalam film industries?

All the aspects like technique and acting are the same across industries. Telugu films have a high budget and are mounted on a big canvas. If we combine the twin Telugu states the theatres and audiences are more in number.

Do you think OTT will have an effect on theatres?

The theatre viewing experience is ultimate and it will be completely different. Mammootty sir would not look at the monitor after doing a shot. He says cinema is meant for a big screen experience. Films like Ramarao On Duty have to be watched in theatres only.

Apart from Malayankunju, there are four other Malayalam films lined up for release. Two movies are yet to go to the shooting stage.