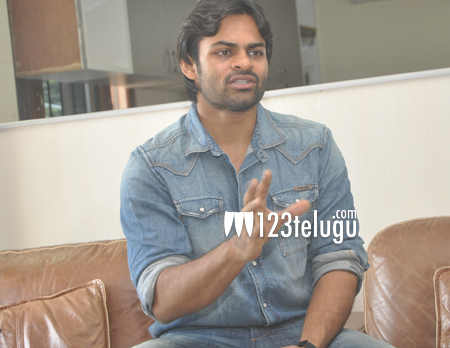 Mega hero Sai Dharam Tej is gearing up for the grand release of his upcoming film Subramnayam For Sale. Directed by Harish Shankar, the film has Regina Cassandra as the female lead. On the eve of the film’s release this 24th, we caught up with him for a brief interview. Let’s see what he has to say.

Q) What is Subramanyam For Sale all about ?

It is a Harish Shankar mark commercial entertainer which is laced with strong family emotions that you will see in every Dil Raju film. SFS is a complete entertainer for all sections of audience.

Q) Tell us briefly about your character in the film ?

I play the role of a youngster who goes to America to earn a lot of dollars. My character has got good emotions and it will be quite different when compared to my previous films.

Q) What can audience expect from you in this film ?

In Subramanyam For Sale, audience will see a different angle in my acting. I worked very hard to look the part and this film will redefine me as an actor.

Q) Tell us about your working experience with Regina ?

We are good friends and enjoy a lot while working on the sets. We discuss thoroughly about our scenes and try to make some changes during the romantic scenes in the film.

Guvva Gorinka is an energetic melody song of Chiranjeevi garu which is apt for our cinema. We tried our best to meet the expectations of the super hit song.

Q) How was it working with Harish Shankar ?

Harish Shankar and I share a good rapport since a long time. Working with him involves a lot of positive energy and I decided to do the film as soon as he narrated the script. It is a great experience working with him

Q) Why are you doing back to back films with Dil Raju ?

There is no particular reason but Dil Raju is ready with good scripts. Anil Ravipudi’s Supreme and another film titled ‘Satamanam Bhavathi’ are in the pipeline.

I am currently working for Tikka in Sunil Reddy direction. Anil Ravipudi film will go on floors very soon and Satamanam Bhavati will roll out later this year.