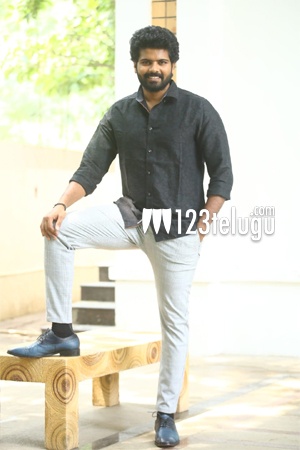 Dongalunnaru Jagratta, a survival thriller starring Sri Simha Koduri and Preeti Asrani in the lead roles is up for a grand release this Friday. Suresh Babu of Suresh Productions and Sunitha Tati of Guru Films have jointly produced this film and it is helmed by debutant Satish Tripura. Ahead of the movie’s release, we had a brief interaction with the hero Sri Simha. Here is the transcript.

What excited you to do this film?

The film has a gripping story and also it is a new genre film. Without stretching the film, the director Sathish wrote a strong suspense thriller. Having Suresh Productions and Guru Films associated with us has even excited me more.

How is your role going to be in the movie?

I played a thief and there will be a character arc in this story. We have shown how a thief who came to rob has changed himself realizing his mistakes. We tried to show the thief character very naturally. You will be irritated seeing the thief but at the same time, you will empathize with him after he changes.

Had it been difficult shooting the majority part in a car?

It is more challenging for the camera department rather than me. There won’t be more space just while shooting in a room. Here we are shooting in a car and you can thereby understand how difficult it would have been. But camera man Yashwanth has done a brilliant job. You wouldn’t feel bored any where.

A few words about the director Satish Trupura?

Sathish Tripura did direction course in Ramanaidu film institute and later worked as an associate for Suresh Production’s movies. He wrote this script with a clear vision in his mind. He succeeded in taking his story to the big screen.

Will you take suggestions from the family for selecting stories?

I will take their suggestions, but the final call would be mine. When it comes to Dongalunnaru Jagraata I didn’t take their advice, I heard the story and felt it to be good. Hence I okayed it. I will ask for suggestions from the entire family but as I said I will make the final decision.

How did Rajamouli react after watching the film?

He felt very happy. Initially, I didn’t tell them about this movie. After the completion, we arranged a special show for the family. Rajamouli Garu was very delighted after watching the film. He suggested a few changes. After making those, the film became even stronger.

I am currently doing Bhaag Saale and Ustaad movies. Bhaag Saale might release this year. Ustaad is in the production phase as of now.