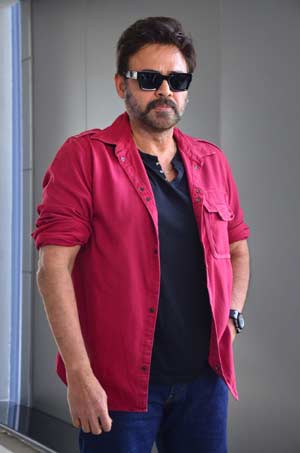 F3 is up for a release this Friday. On this occasion, we caught up with Venkatesh for a detailed interview. Here is the transcript.

Anil Ravipudi said you worked as a newcomer for F3. What do you have to say?

Laughs. Yes, even after being in the movies for so long, I still get nervous while shooting for my film. For the first two weeks, I treat all my projects as my debut films. That keeps me grounded as well.

Does doing comedy come easy for you?

Yes, in a way. I am a very jovial person right from my college days. As I am joking around, the people around me also feel very happy. So, comedy comes naturally to me and for F3, I went all out.

How excited are you as F3 is your first theatrical in three years?

I know my fans were not that happy as Narappa and Drishyam 2 were out on OTT. I feel that not many of the audience have seen these films. But F3 will clear away all the complaints of my fans and family audience.

F3 is about greed for money. What’s your take?

These days, everyone has greed for money and wants to make a quick buck or so. The world has changed and all of us are after money. But when someone gets overgreedy, things go for a toss and the same happens in the F3.

About Anil Ravipudi as a director?

He has a terrific spark as a director. I have known him from the days of Masala and he has done a superb job with F3. His flair for writing stuff in a simple manner is very good and the way he elevates it on screen is his best quality.

He has grown a lot as an actor. As I worked with him in F2, his graph has only increased in recent times. He too has a terrific role in the film and will impress one and all.

When you get hilarious roles, how do you prepare for them?

A lot depends on the director and how he handles me. Anil wanted me to behave in a specific manner and I improvised a lot on the sets and also during the dubbing.

When it comes to comedy, who do you like the most?

During my childhood, I used to admire Allu Ramalingaih a lot and picked up a few traits from him. Also, I like Johny lever and have learned a thing from observing them a lot.

Will F3 exceed the expectations of F2?

Yes, it will. I cannot guarantee the range of success but the comedy quotient is higher in F3. The audience will love the film as we have given ample scope for them to enjoy.

About your Netflix project?

This is one project which I am super excited about. The project came in as a surprise as the makers wanted me in a role that is crazy and has negative shades. This is one role that I have not played in the last 35 years or so. In a week, I will wrap up the project.

Tell us about your film with Salman Khan?

I have known him for years and am doing a film with him finally. I will start shooting soon and have a great role. Apart from that, I have two films lined up with Sithara Entertainments and Mythri Movie Makers.