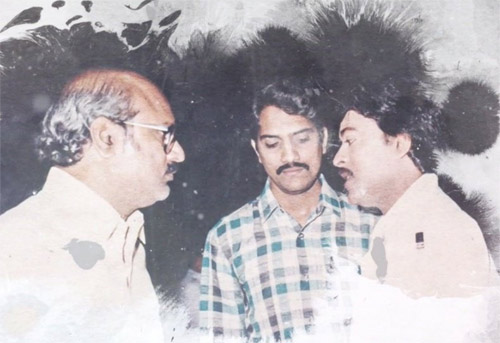 The makers at Vyjayanti Movies, the banner behind Megastar Chiranjeevi and yesteryear diva Sridevi’s iconic socio-fantasy drama, Jagadeka Veerudu Athiloka Sundari, released the much-awaited second AV in Nani’s voice-over. In the second AV, Nani exclusively talks about the legends behind the making of the film’s iconic songs.

Nani first revealed the back story behind the chartbuster ‘Abbani Thiyyani Debba’ song. Apparently, even though producer Ashwini Dutt loved the tune composed by ‘Maestro’ Ilayaraja, Chiranjeevi felt that almost all the songs in the album are becoming too classy and he wanted something massy. It was then that legendary lyricist Veturi told the makers that he will come up with a solid mass song to the same class tune. And the rest, like we all know, is history. Director K Raghavendra Rao had wrapped up the song’s shoot in Bangalore and Mysore in just 2 days. Interestingly, KRR took 11 days to shoot Sridevi’s introduction song ‘Andalalo Mahodayam’.

Revealing Chiru’s dedication, Nani said that the Megastar had shot for the mass number ‘Dhinakku Tha’ under a high temperature of 104°C, with doctors being present on the set. Jagadeka Veerudu Athiloka Sundari completes 30 years of its landmark journey on May 9, 2020.