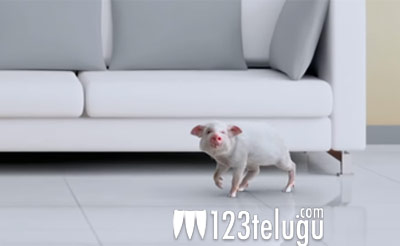 Ravi Babu’s Adhugo has been in news for over a year now. The film’s teaser was finally released today and the first impression we get is that the film is going to be a cute comedy.

A small piglet named Bunty is shown in the teaser which dances and impresses you with its cute steps. The piglet has been created through 3D animation which looks decent in the teaser.

A voiceover of a small kid in the teaser reveals that the film will be based on the story of a boy who owns a piglet. Suresh Productions helm this experimental film which is up for a release soon.