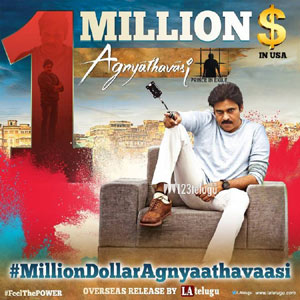 Not a single premiere yet, but Power Star Pawan Kalyan’s Agnyaathavaasi has already become his career best opener in the US. The film has grossed over $1 million from 400+ locations from the pre-sales.

With this, Agnyaathavaasi has surpassed Pawan’s previous best premiere, Sardaar Gabbar Singh’s $616K, and set its eyes on $1.5 million milestone and even more from the pre-sales alone.

This is only the beginning and the collections will be phenomenal if the movie manages positive talk once the premieres begin. Stay tuned for further updates on the film’s hourly collections.