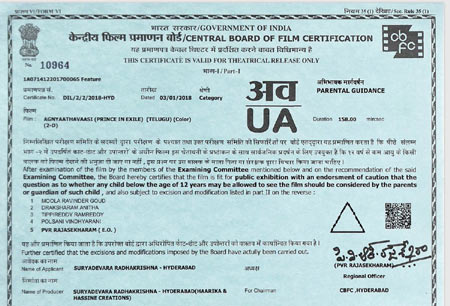 Power Star Pawan Kalyan’s most eagerly awaited silver jubilee film, Agnyaathavaasi, completed its censor formalities recently with a UA certificate. The film is all set for a humongous worldwide release on January 10.

Meanwhile, the film’s censor certificate has been making a splash on social media since evening. What’s catching everyone’s attention is the film’s runtime, which is locked at 158 minutes. It can be said that a 2 hour 38 minute wholesome entertainer is just perfect for a Sankranthi release.

Agnyaathavaasi’s trailer will be released very soon. The film is directed by Trivikram Srinivas and it stars young beauties Keerthy Suresh and Anu Emmanuel as the female leads. S Radhakrishna has produced the movie which has its music composed by Anirudh Ravichander.