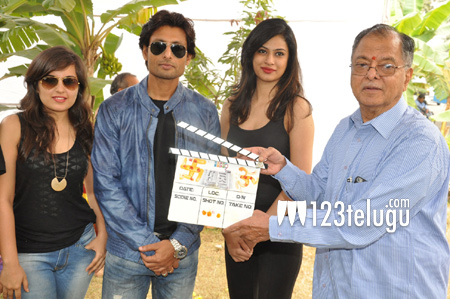 Director Raj Madiraju’s new movie Aithe 2.0 was launched in a grand ceremony in Hyderabad earlier today. The film features Indraneel Sen Gupta, Zara Sha, Abhishek, Karthavya Sharma, Neeraj, Mrunal and Mrudanjali in lead roles. He previously directed the movies Rushi and Andhra Pori. Raj Madiraju said that Aithe 2.0 has no connection with Aithe and is not a sequel to Gunnam Ganga Raju’s production.

He spoke to the media saying, “Aithe 2.0 revolves around six youth who are always hooked to social media, which eventually determines their future. The film is a techno thriller and explores the ill effects of social media and technology on youth. It has a good message for the audience.”

Arun Chilveru is scoring the music. Dr.Hemanth Vallapu Reddy, Dr.Ravi N Rathi and K.Vijaya Rama Raju will produce this film on Firm 9 pictures banner. The movie will be released in Telugu and Hindi. The Hindi version has been named Pirates 1.0 .