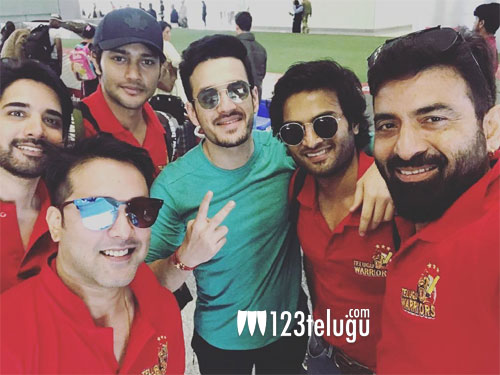 The Celebrity Cricket League has entered its 7th season. The popular T10 premiere league will kick-start in Chandigarh tomorrow (Feb 27). Six teams hailing from six film industries across India will be fighting it out for the cup. Young hero Akhil Akkineni is the captain of the Tollywood team, Telugu Warriors.

Today, Akhil and other members of Telugu Warriors landed in Chandigarh and began practicing in the nets. Telugu Warriors will be locking horns with Bhojpuri Dabanggs in their first encounter at 8 PM tomorrow. The tournament will be concluded on March 1.

Apart from Telugu Warriors and Bhojpuri Dabanggs, Punjab Details Sher, Mumbai Heroes, Bengal Tigers and Karnataka Bulldozers are the other teams that are vying for the cup.