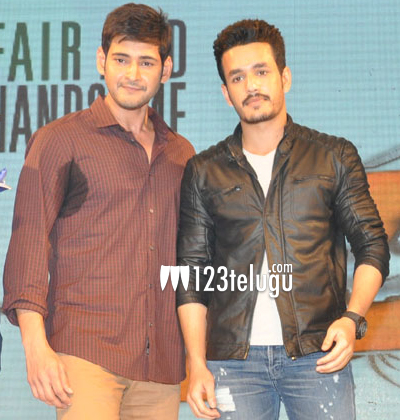 The audio launch event of Akhil Akkineni’s debut film, Akhil, took place last night in style. Superstar Mahesh Babu was the chief guest at the event and speaking on the occasion, Mahesh had some nice things to say about the young Akkineni hero. Mahesh said that Akhil has terrific screen presence and that it was evident in his cameo in Manam and even in the trailer of his debut film. Mahesh also said that Akhil will be a big star in the future.

Highly impressed with the film’s trailer and its making, Mahesh exuded confidence about the film’s success and congratulated Nithiin and the entire crew for such a quality output. Talking about the film’s director, Mahesh said that VV Vinayak has his own way of presenting his heroes on screen. Finally, Mahesh concluded saying that Akhil will continue ANR’s legacy with his work.