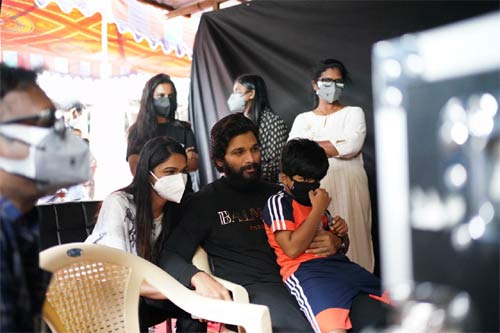 It is a known fact that Allu Arjun’s daughter, Arha is doing a film called Shakunthalam that will have Samantha as the lead. She is shooting for the film as of now in Hyderabad.

A few days back, Allu Arjun visited the sets and saw her daughter shoot for the film. Today, something special happened as Allu Arjun was shooting in the same studio where Arha was also shooting for her film.

The father and daughter were in fact shooting side by side in special sets at the Annapurna Studios and during the break time, Bunny visited Arha and spent some time with her. Shakunthalam is directed by Gunasekhar.