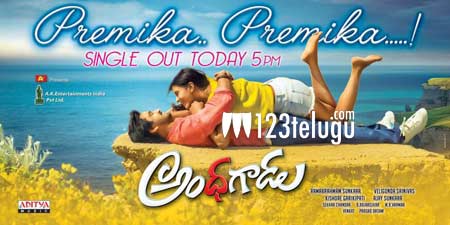 Young hero Raj Tarun, who is riding on high with the success of his last release Kittu Vunnadu Jagratha is coming up with yet another rom-com entertainer called Andhagaadu.

The film’s theatrical trailer and three songs from the audio are getting positive feedback from the moviegoers. Now, the latest update is that the film’s fourth single Premika Premika will be released today at 5 pm.

Noted writer Veligonda Srinivas is debuting as the director with this film and Anil Sunkara is producing it. Hebah Patel is the female lead and Rajendra Prasad will be seen in an important role.

Sekhar Chandra scored music for this film which is slated for June 2nd release.