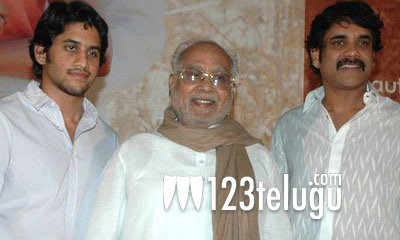 ANR, Nagarjuna and Naga Chaitanya will soon come together, for the first time ever, for an upcoming Telugu film. Vikram Kumar, who had earlier made Ishq, is going to direct the film. Buzz is that ‘Manam’ is the title under consideration for this eagerly awaited film. Currently pre-production is going on in full swing and Nagarjuna, in a recent event, revealed that the film will begin in June. Several top actresses are being considered to be paired up with Nagarjuna and Naga Chaitanya in his multi-starrer and it remains to be seen who bags the lucky chance. Nagarjuna will soon be seen in Greeku Veerudu and Bhai, whereas Naga Chaitanya’s next film is going to be the Telugu remake of Vettai.