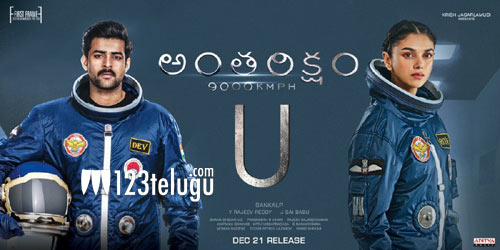 Varun Tej, Lavanya Tripathi and Aditi Rao Hydari’s eagerly awaited space thriller, Antariksham, has wrapped up the censor formalities this afternoon. The CBFC has cleared the film with a clean U certificate. The film is now all set for a grand worldwide release on December 21.

In Antariksham, Varun Tej plays an Indian Space Centre astronaut who leads his team on a nail-biting mission in the space. Ghazi fame Sankalp Reddy has directed Antariksham, while Krish and Rajiv Reddy produced it. The film is loaded with visual effects, with over 1,500 shots featuring high-class VFX.