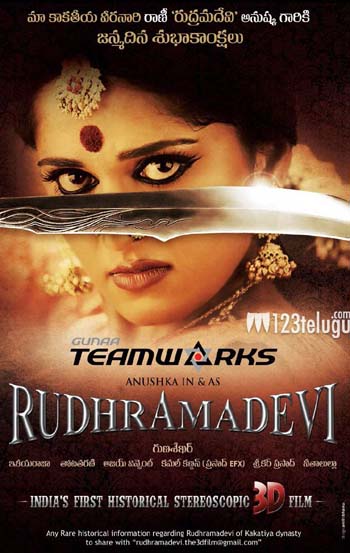 Anushka is one of the most sought after actresses for playing female centric roles and obviously, she was the first choice of Director GunaSekhar’s high budget flick ‘RudramaDevi’. The shoot of the movie is going on at brisk pace in Hyderabad.

Huge sets have been erected at Annapoorna Studios for this film and as per the reports, the settings are spectacular and will be a visual treat. Speaking on the occasion, director GunaSekhar said “Rani Rudrama Devi’s journey is so special and has a place for her in the world history. Generation of today should know her original story and we are taking every care to depict the history as it was written. The movie is going to be shot with high technical standards”.

Rana will be playing the male lead and the film has an interesting cast. Illayaraja is composing the music and Gunasekhar is the director and producer of the movie. This movie is a bilingual and it is being shot simultaneously in Telugu and Tamil.